Just back from a spectacular early June photo trip to Wyoming focused on Powder River Basin Coal Trains, Wild Horses, and Rodeos. That’s right, no Yellowstone, no Grand Teton – a different kind of Wyoming trip, including a part of central Wyoming few tourists see. This entry focuses on the Coal Trains.

The mines of the Powder River Basin supply most of the coal used by power plants in the U.S. The Joint Line, a train line owned by Union Pacific and BNSF, connects the coal mines to the rest of the country. A double track several years ago, then a triple track, it is now four tracks for much of its length. The allure of the Powder River Basin for a photographer is endless strings of twisting coal trains, two, three, and four abreast, a sight that cannot be seen anywhere else in the world.

After hightailing it out of Denver as soon as my plane landed, I spent the first night in Cheyenne, at the historic Plains Hotel, the height of fashion and up-to-the-minute conveniences – well, in 1911 anyway. Its exquisitely beautiful lobby and low price made up for the rather basic room. 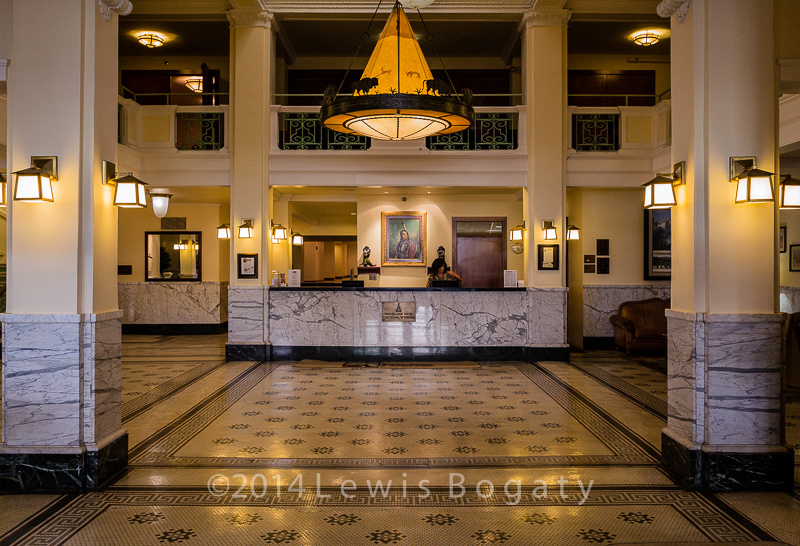 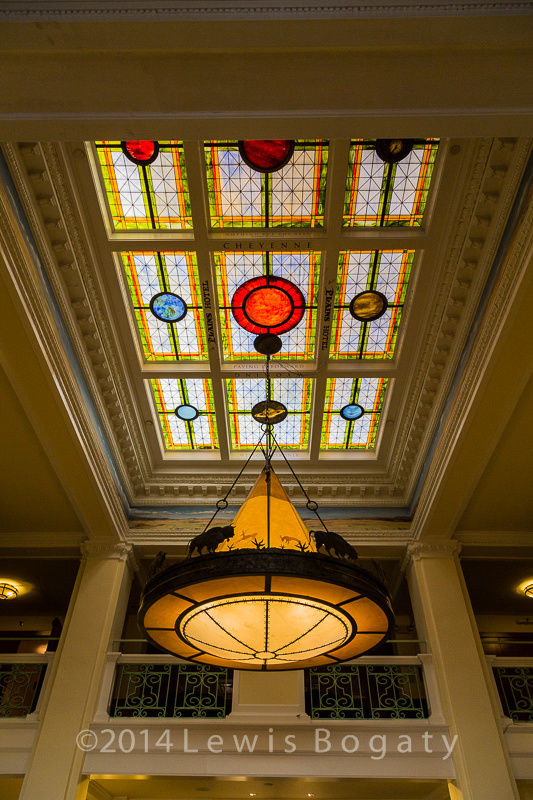 Downtown Cheyenne barely stirred on a lazy June day, a month before the madness of Frontier Days. The stately Wyoming State Capitol and elaborate train depot face each other at opposite ends of quiet Capitol Avenue. And the Union Pacific Train Yard a block from the hotel provides nice photo opportunities. 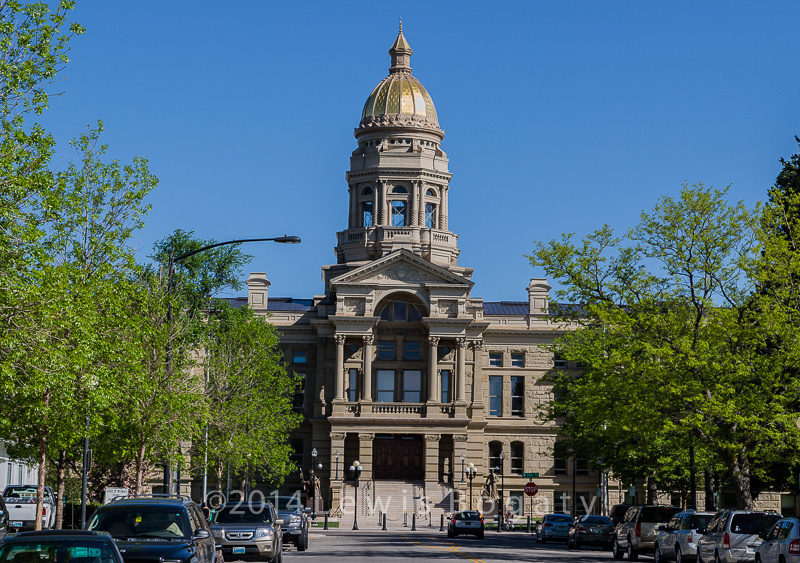 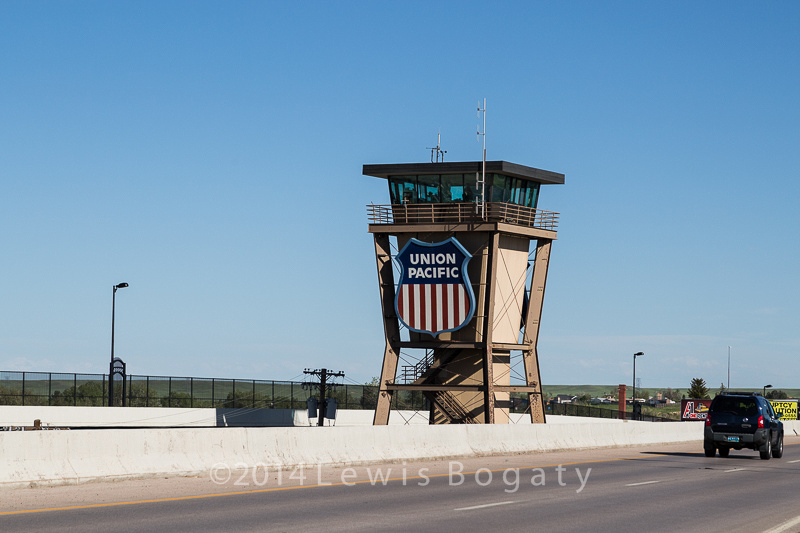 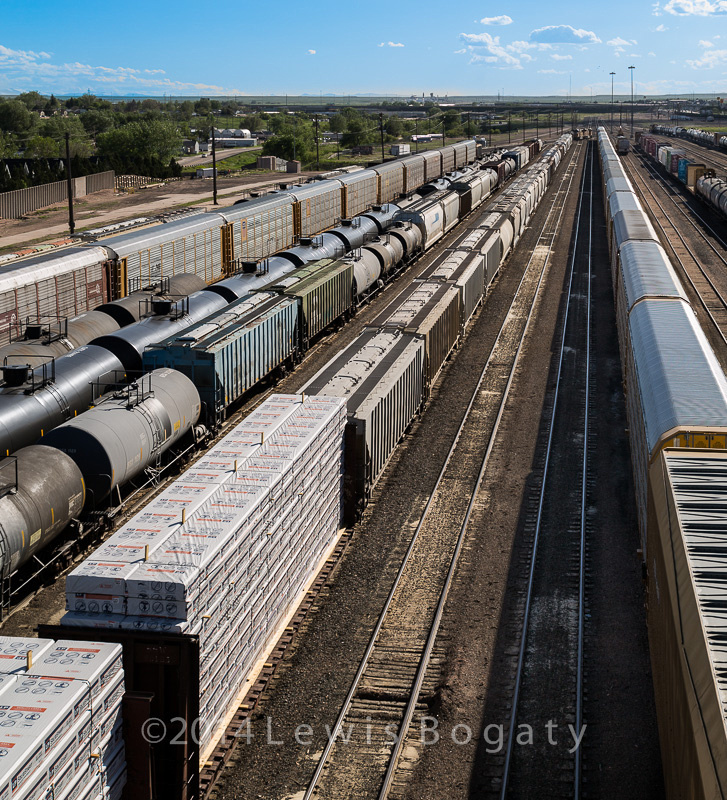 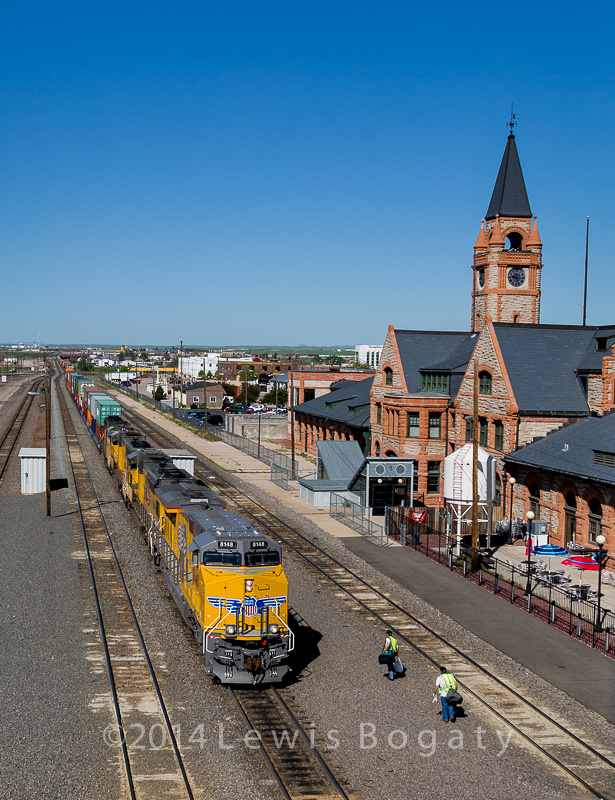 After a leisurely late breakfast at the hotel’s restaurant where I was the only customer, I took a quick side-trip to Laramie’s historic downtown and the train yard that overlooks it. 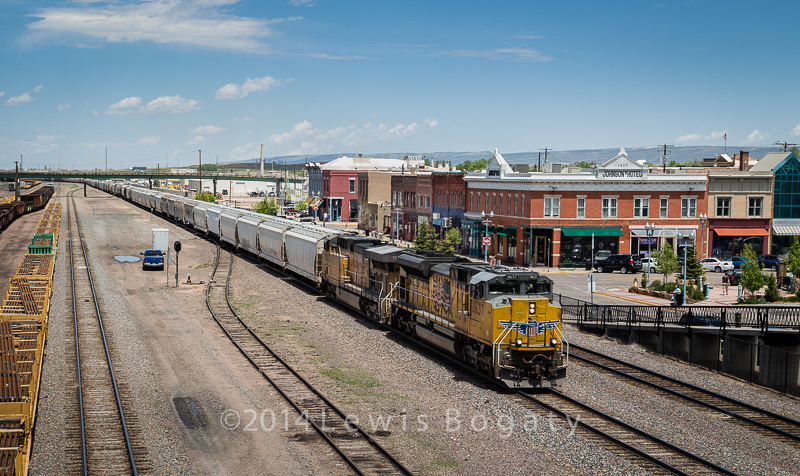 Then headed north through Shawnee, where I encountered this massive storm, which seemed to be staying on the other side of the mountain – until it wasn’t. I was pelted relentlessly with hail as I drove through it. 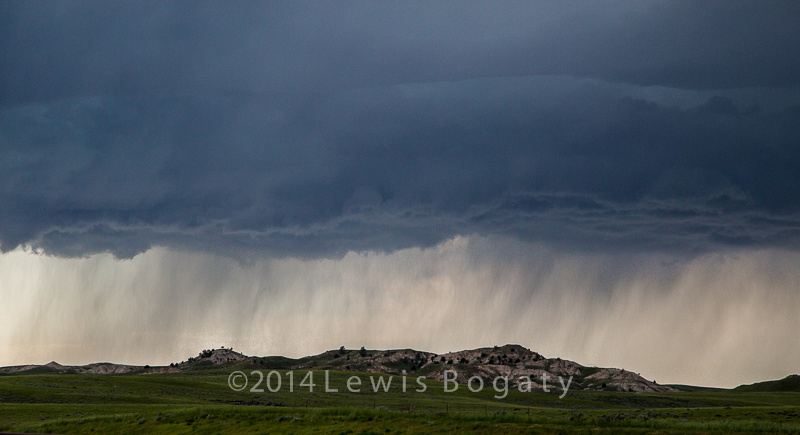 Then off to Douglas where I would camp for several days, now back in the 21st Century at the Sleep Inn & Suites, a very new, very modern, very nicely-done hotel, as I photographed the trains of the Powder River Basin. Route 59, from Douglas to Gillette, is the main artery of coal country. Douglas is a boom town. The whole area is alive with railroad, oil fracking, and coal activity. Trucks of every description jam the once-quiet 2-lane Route 59. The two-hour drive on Route 59 from Douglas to Gillette offers no gas stations and virtually no other services. This is the middle of nowhere – nowhere but coal mines and oil drilling and railroad tracks. I spent many hours driving and re-driving that first hour from Douglas north. That is where the trains are.

You first meet the coal trains as they cross Route 59 on an overpass. 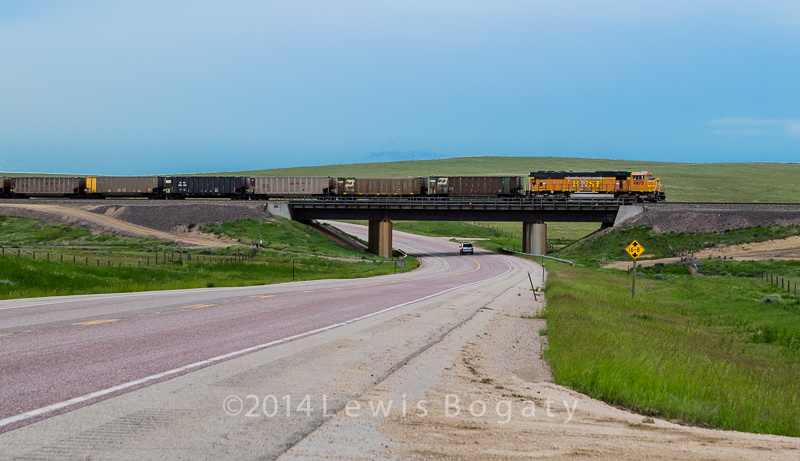 From that point, they stretch out for miles on the west side of the road until they again cross Route 59, this time on an underpass, and disappear to the east. 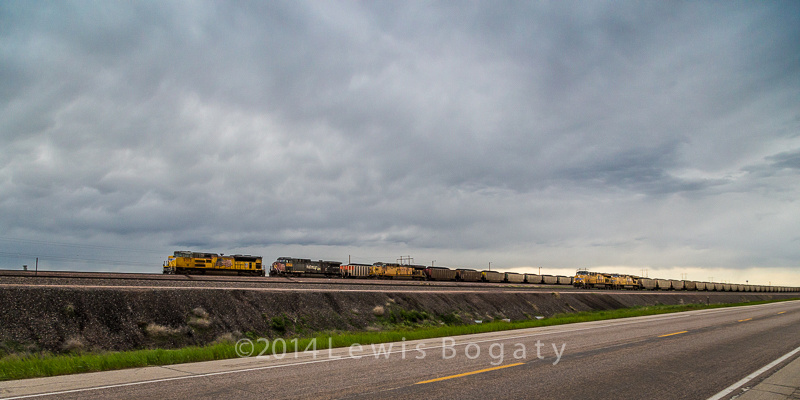 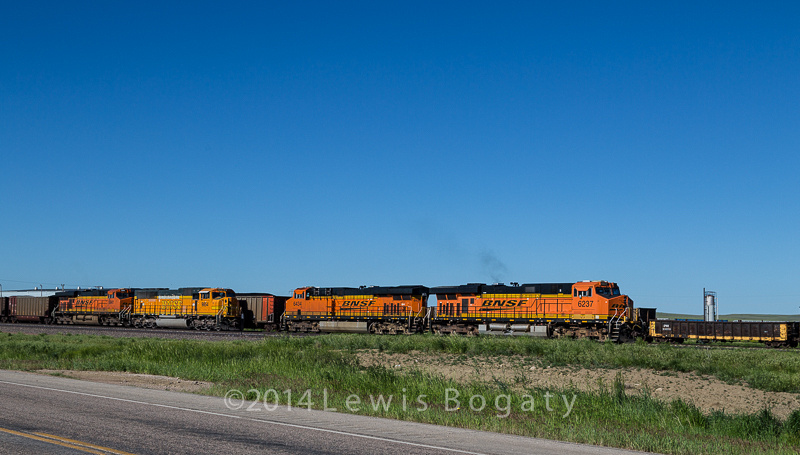 A day of following the coal trains would not be complete without a meal at Penny’s Diner. Between the overpass and the underpass, sits the town of Bill. Well, town may not be the best descriptive word. Bill, the only stop between Douglas and Gillette, has nothing but a ramshackle convenience store, the Oak Tree Inn and Penny’s. The population may be close to 0. Bill only exists because Union Pacific has a yard there, where most trains must stop for crew changes. Union Pacific built the motel and diner for the train crews, but both are open to the public, despite many inaccurate statements to the contrary on the internet. As I write this I am drinking coffee out of my Penny’s Diner mug. 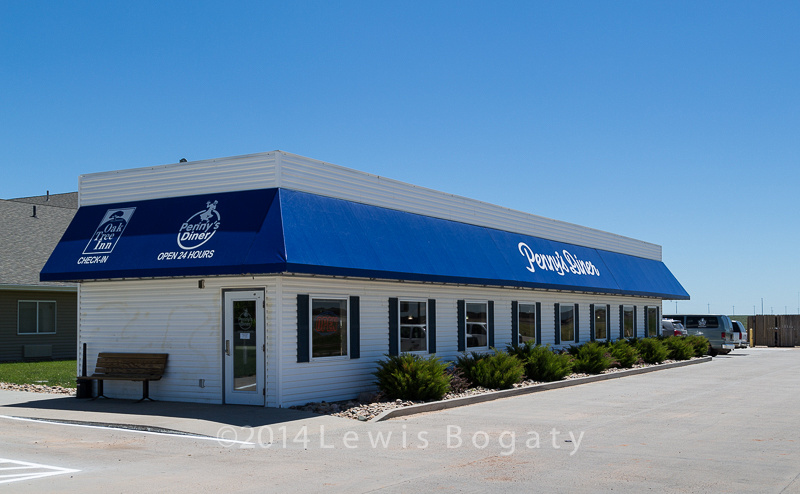 North of the underpass, the line continues a couple of miles east of Route 59. My ultimate destination was Logan Hill, where the trains can be viewed from above as they labor up the incline. Logan Hill is reached by a dirt road called Steckley Road, which is an access road to the Thunder Basin National Grasslands, though Google Maps has never heard of Steckley Road. It has heard of U.S. Forest Service Road 942 only if you type it in a certain way. But the place is not hard to find, a dirt road on the right as you drive north. 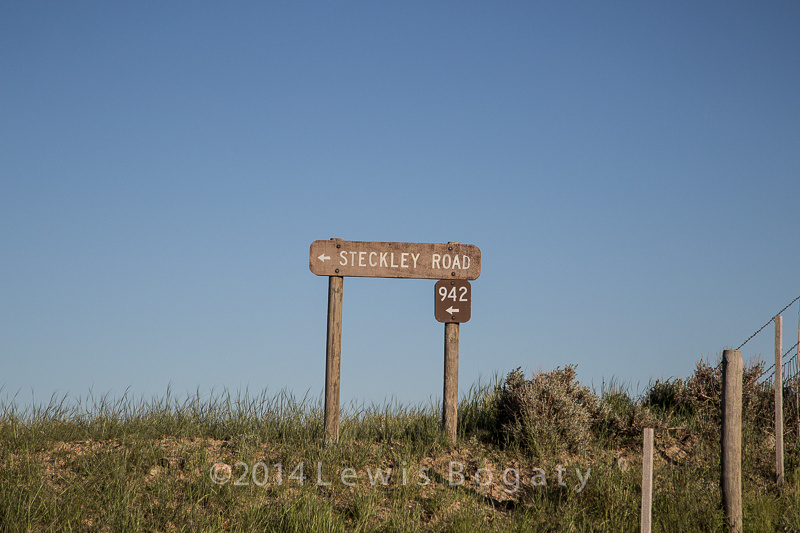 Winding along the dirt road, I expected to be quite isolated and alone. Boy was I wrong. From 8 a.m. until 6:30 at night, massive single and double ore trucks thundered down the hill every two to three minutes shaking the bridge over the tracks and throwing up massive dust clouds. 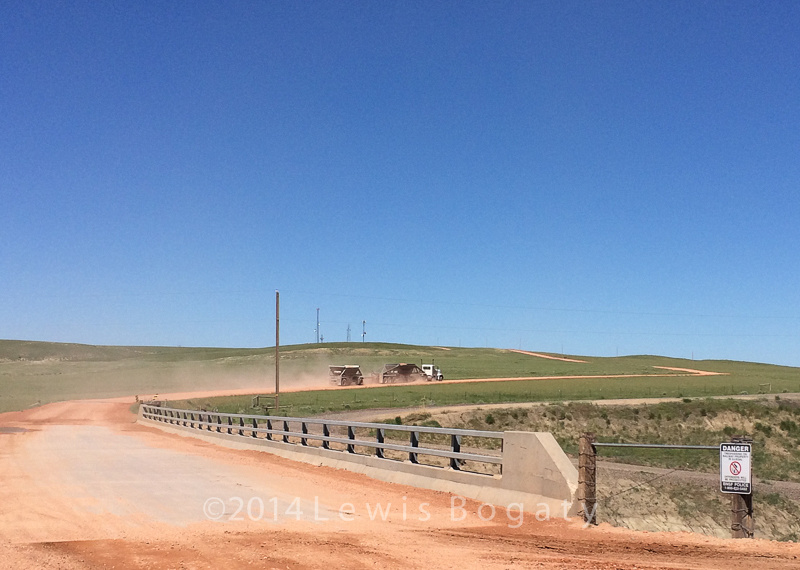 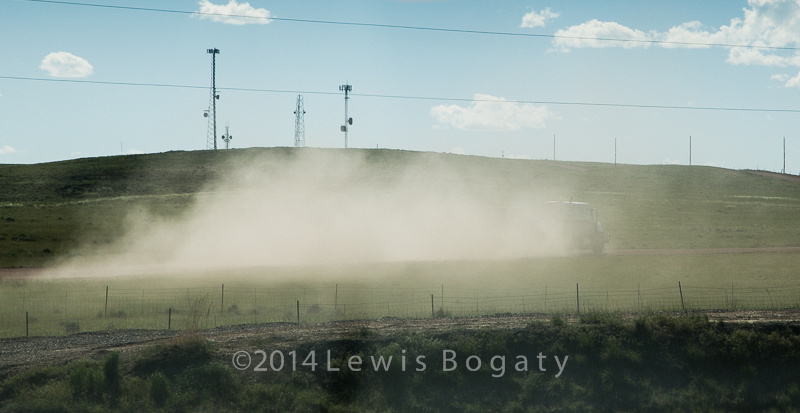 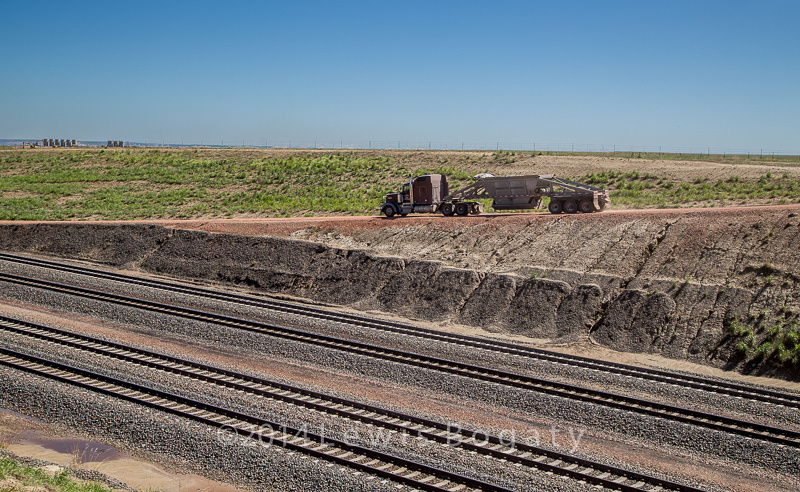 But what a great view. On the one side, empty coal trains speeding along, and on the other side, loaded coal trains struggling up the hill. There are a number of other spots off Route 59, including Antelope Coal Mine Road, but Logan Hill is about as good as it gets. 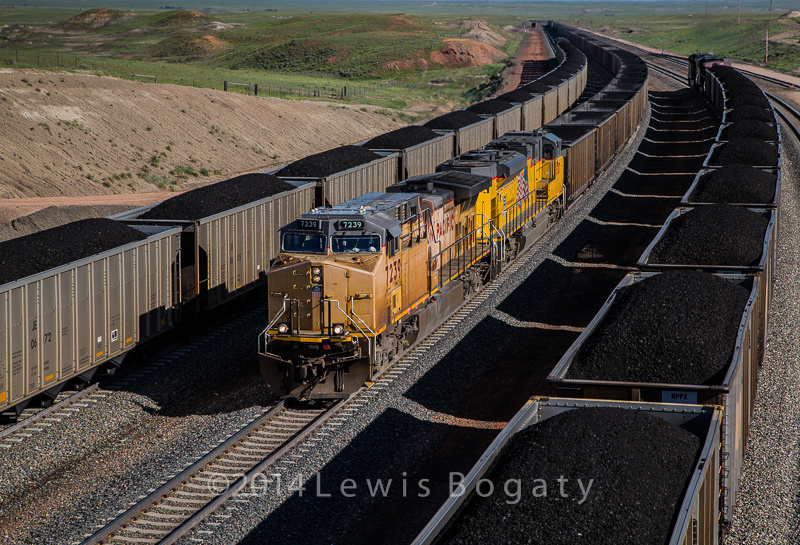 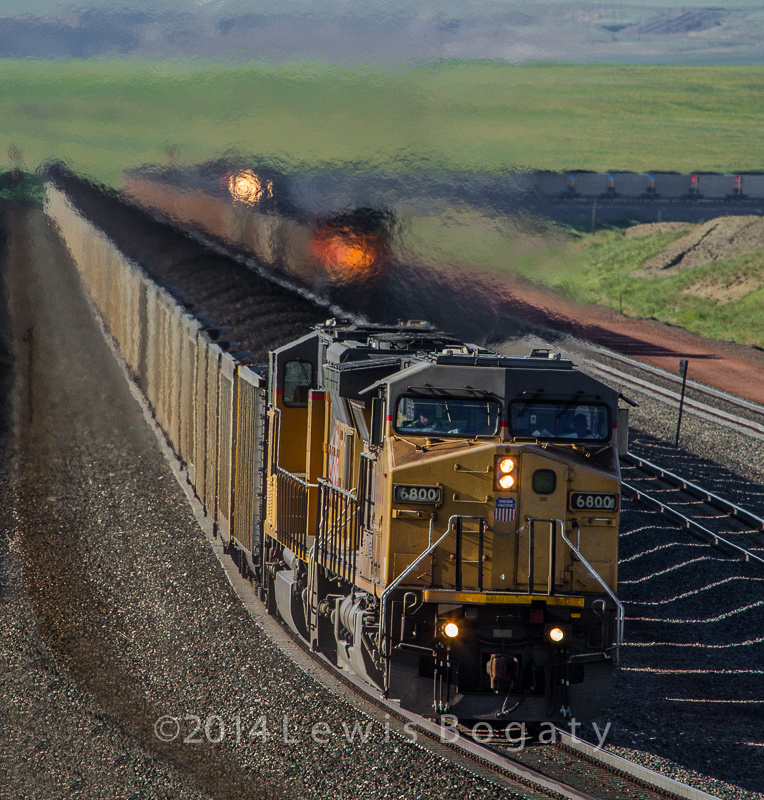 Next stop Gillette, and my final destination on the “coal train” part of my trip: the BNSF Donkey Creek Yard, east of Gillette, where the Orin Line ends (actually begins, as the mileage is counted from that point) on the triple-track at Donkey Creek Junction. 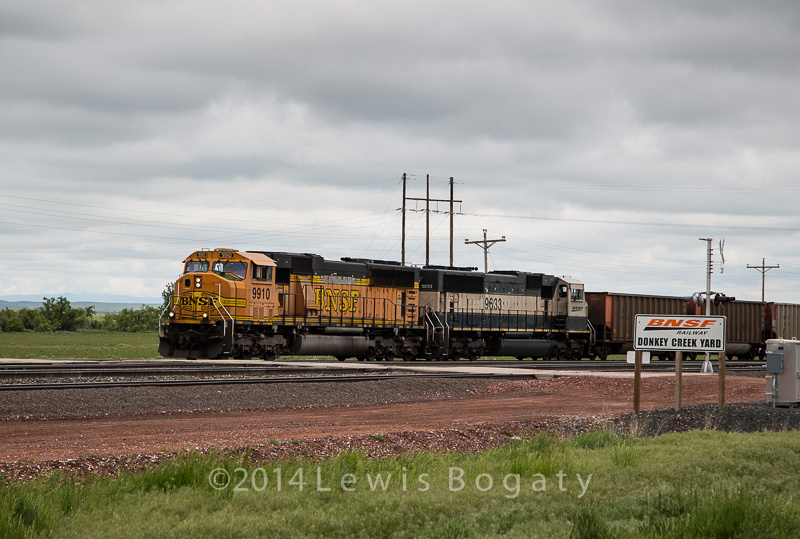 Trains in the yard, trains to the west waiting to come into the yard, and the trains coming off the triple track all make for striking images. 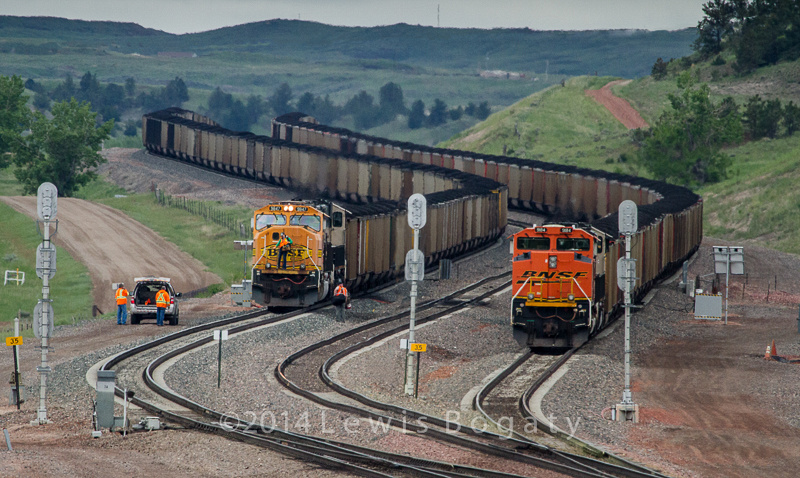