Just back from my early June photo trip to Wyoming focused on Wild Horses, Rodeos, and Powder River Basin Coal Trains. This post is on the wild horses and rodeo. See my previous post for a discussion of the Powder River Basin coal trains.

Leaving Gillette and the Powder River Basin behind, I headed west to Cody, which boasts a nightly rodeo and the nearby McCullough Peaks Wild Horse Herd Management area, where 150 or so mustangs roam 110,000 acres and are completely wild.

The trip west led me through the beautiful Big Horn Mountains. As I happily photographed the foggy mountain tops before me, I did not quite realize that I would shortly be up there straining to see the road a foot in front of me. 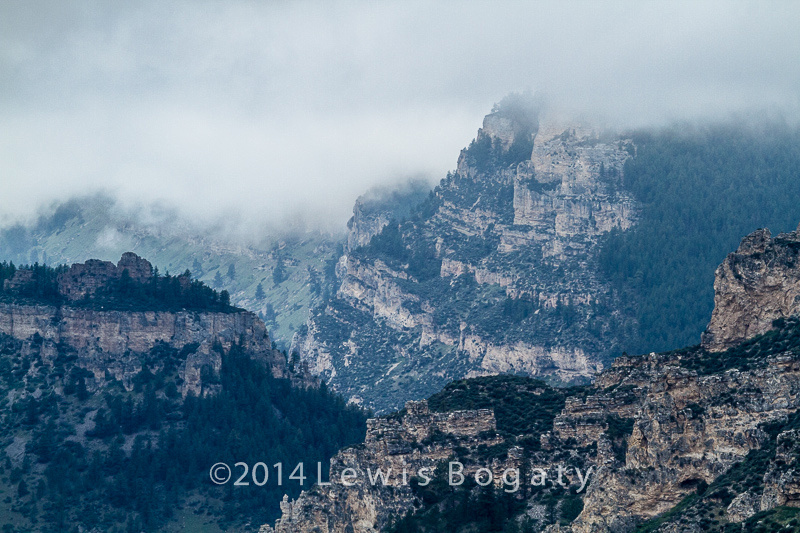 And coming down the other side, a beautiful view. 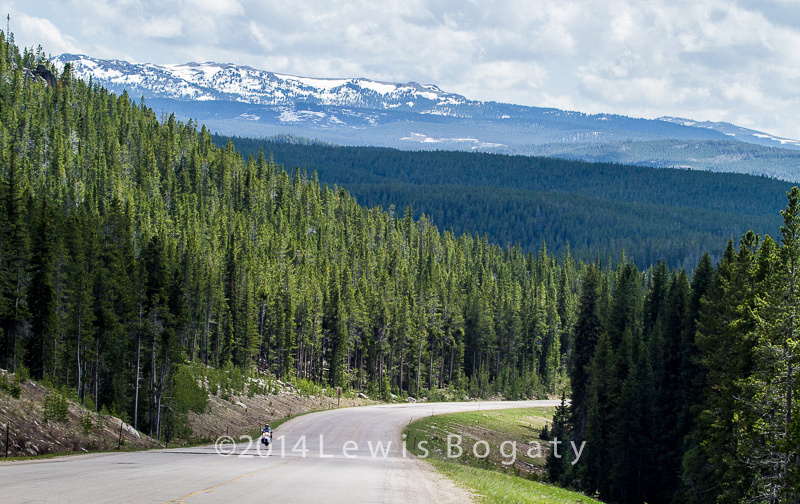 Virtually the only stop between Gillette and Cody was the small town of Graybull, and I was nervously watching my gas tank which was in a close race with the miles to go. As I left Graybull behind, I passed this striking vista. 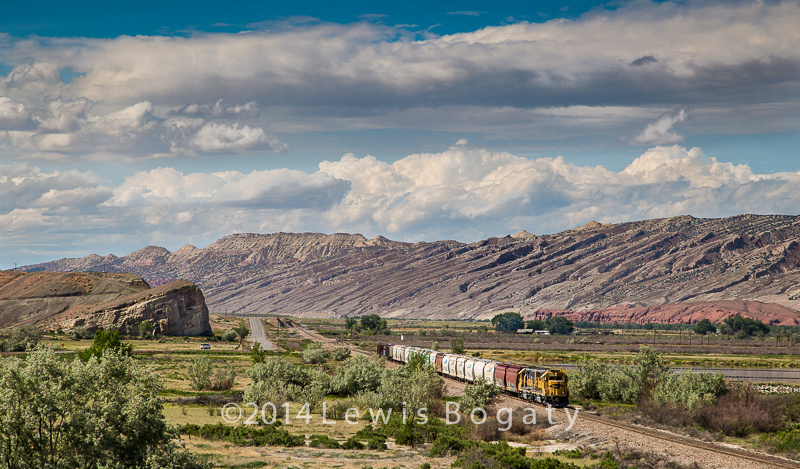 Cody. After the obligatory gun battle at Buffalo Bill’s Irma Hotel (with a typical 1880s pickup truck strategically placed in the background), 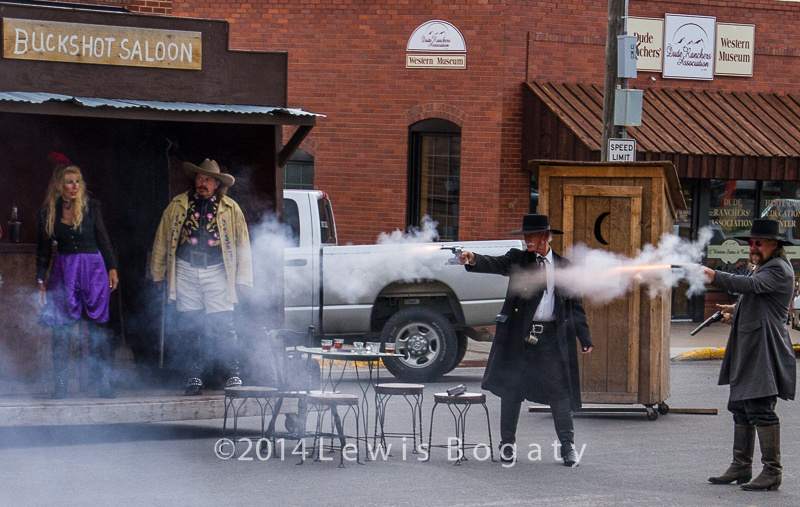 it was off to the rodeo.

Cody has a big-time rodeo, the Cody Stampede, for several days in July, but it also has a decent rodeo on a nightly basis, the Cody Nite Rodeo. Apparently it is the only nightly rodeo in the world. It is more than a local rodeo. The cowboys come to Cody from many states and South America to gain the points they need to advance in the profession. In early June, the stands were not packed on weekdays (though they were on Saturday night), so I was able to move around freely to position myself to photograph different events. 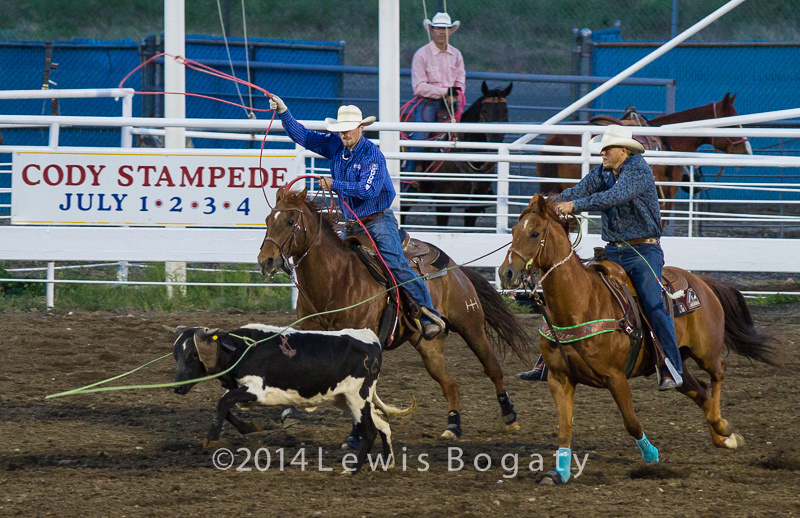 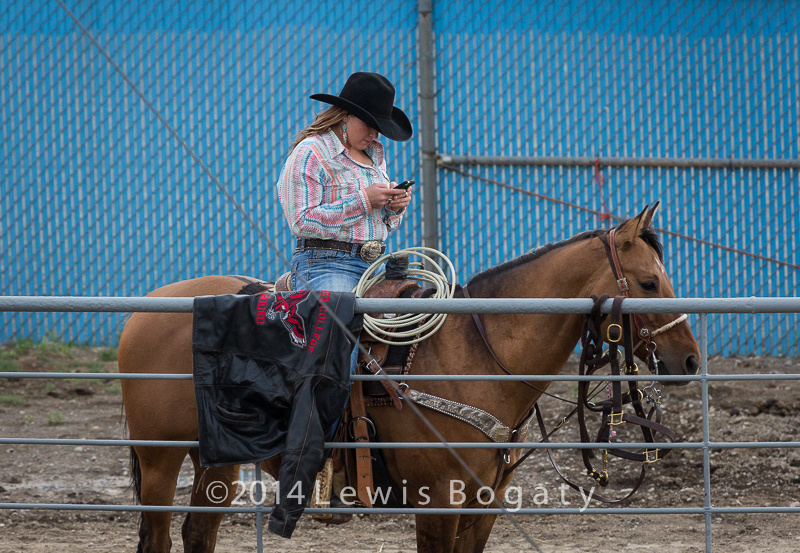 Cody's snow-capped mountains lent a scenic background to the rodeo, but the stands were a cold wind tunnel, and I was quite glad to have my jacket. 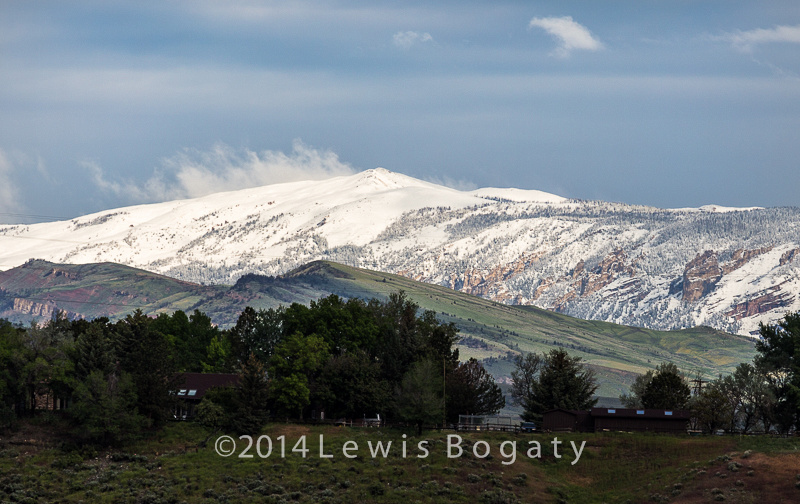 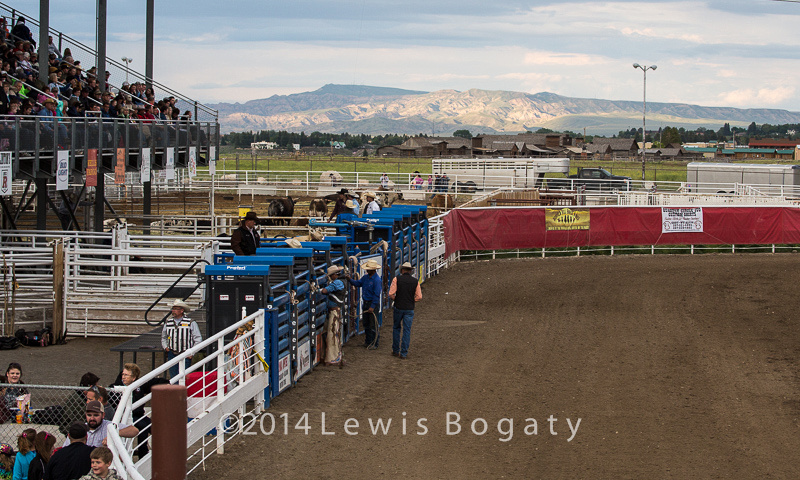 It is a fun rodeo, filled with pageantry and a variety of events. 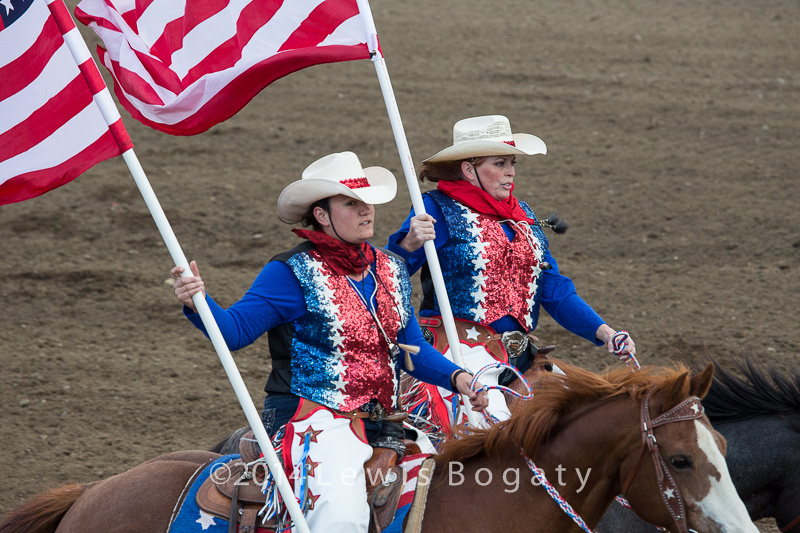 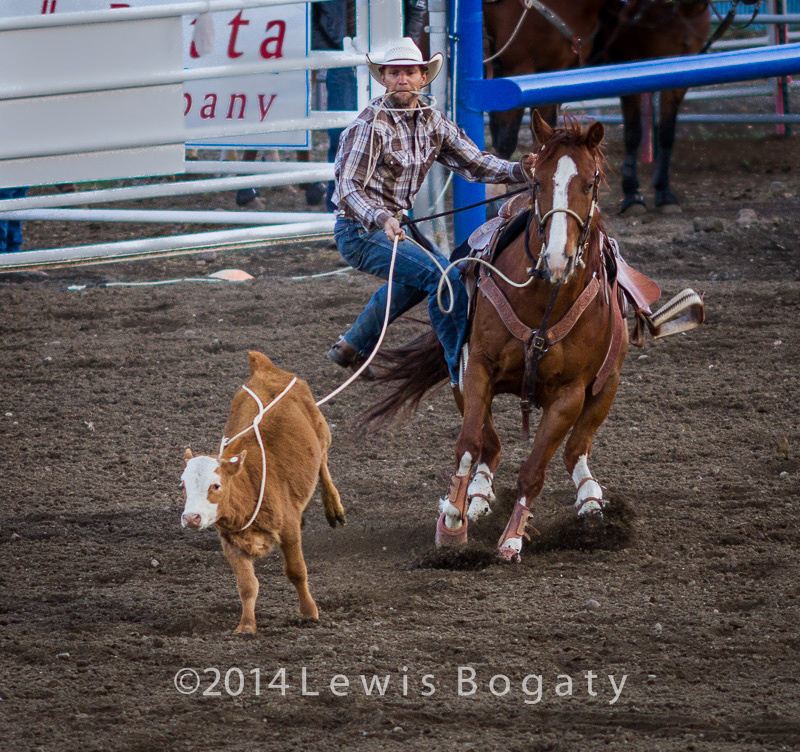 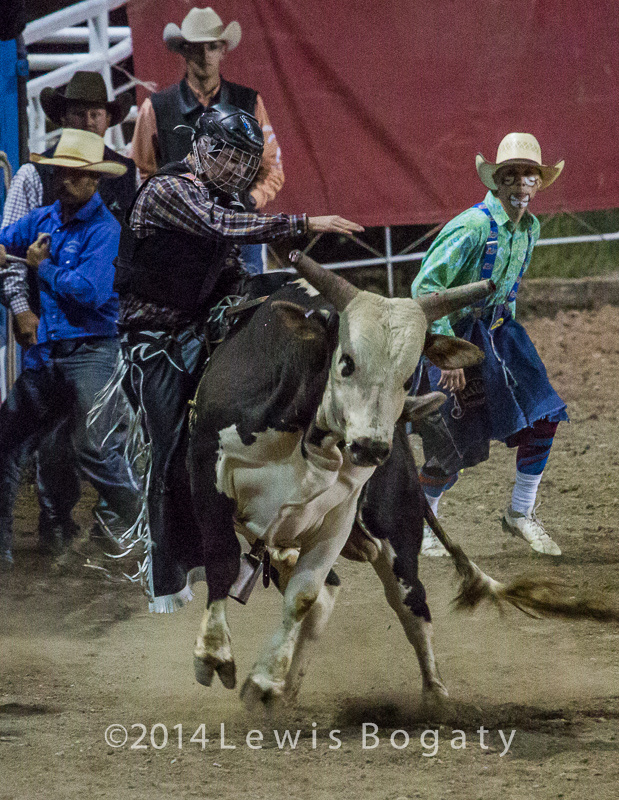 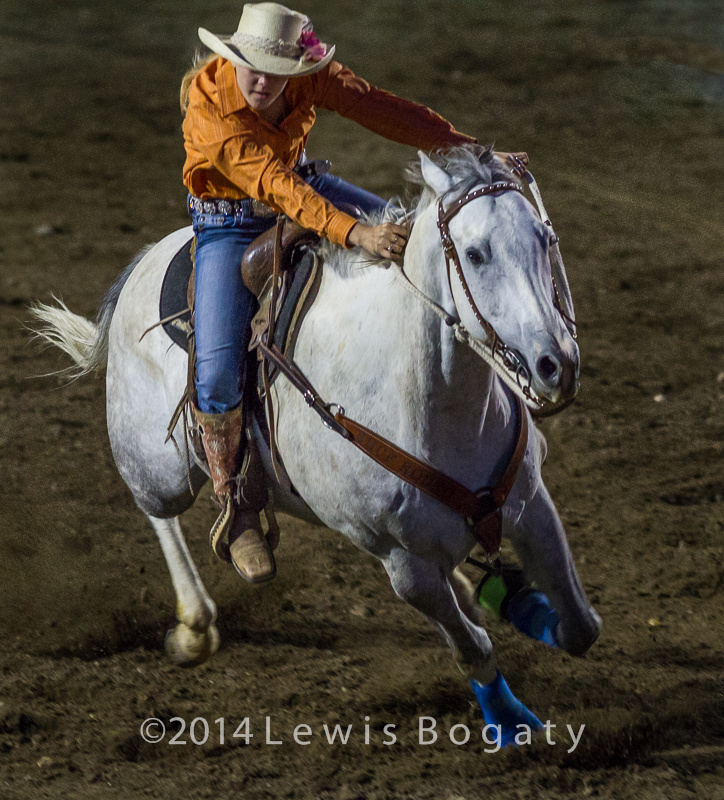 Before the rodeo starts, Hollywood the bull stands out front for kids to sit on and have their pictures taken. One night, arriving after the rodeo began, I encountered these girls leading the bull back to his pen. He was determined to sample a particularly tasty weed he spied, which provided me one of my favorite pictures from the rodeo. 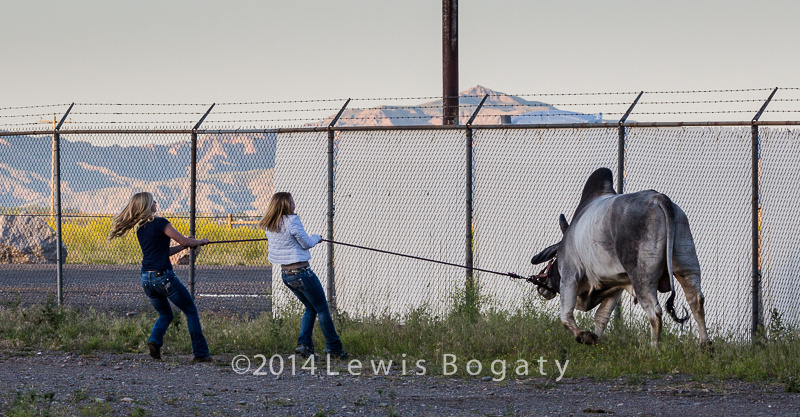 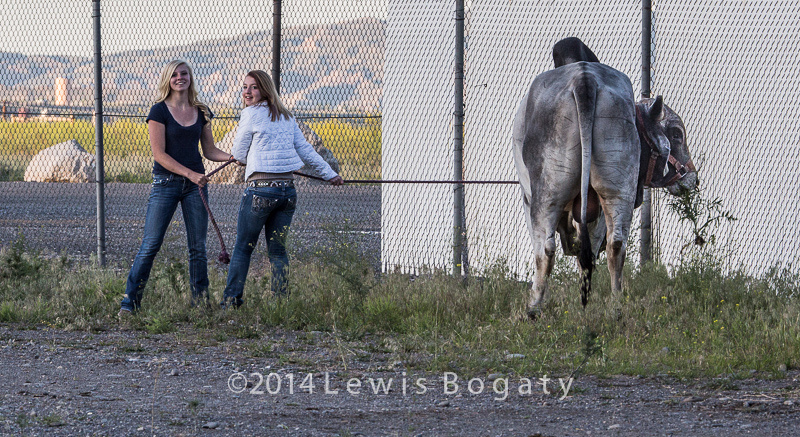 You can view a selection of my favorite rodeo photographs from the trip in the Rodeo Gallery of the Scenes Group on my website, www.LewisBogatyPhotography.com 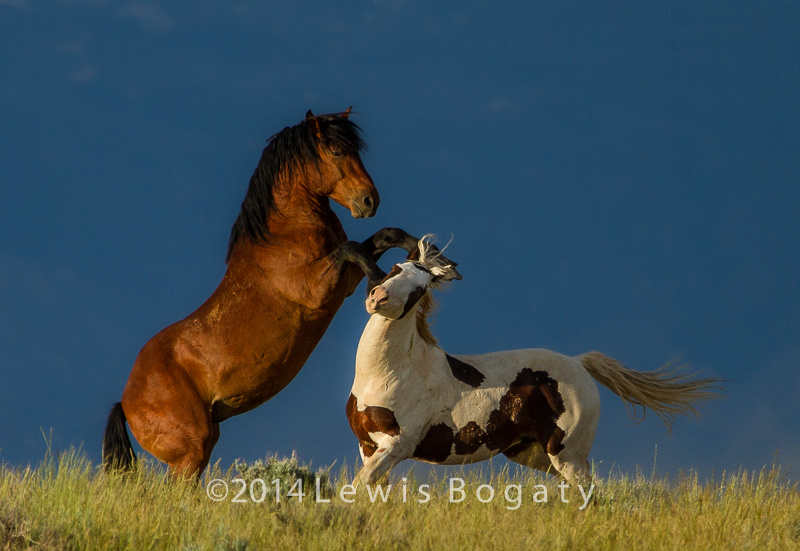 I went out to photograph the McCullough Peaks mustangs in the early mornings and evenings over several cool days in a landscape of blue skies, sage brush, grasses and a variety of wild flowers. In the photos below: cactus in bloom, a bird, and an antelope bolting away from fighting horses (barely caught in a not very notable photo). 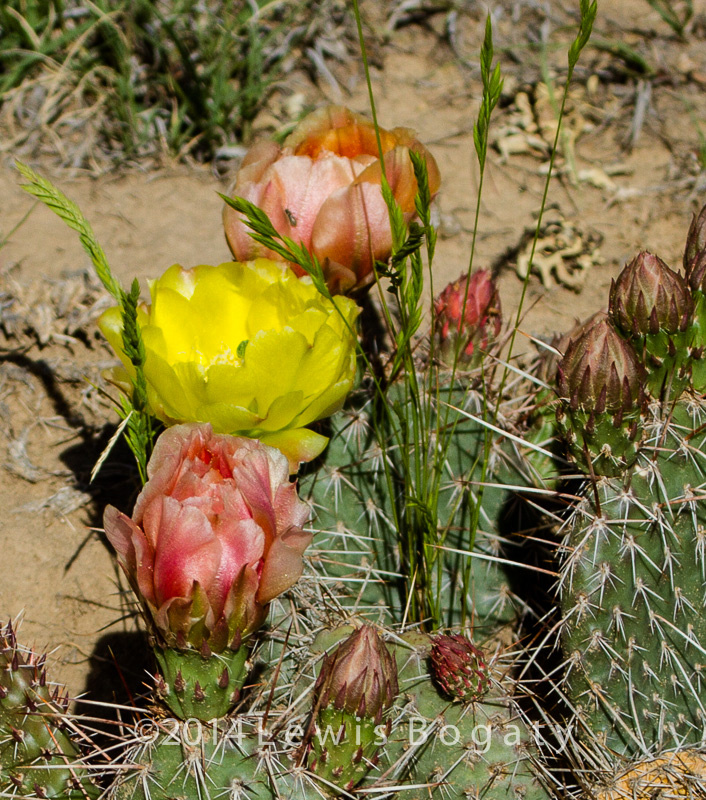 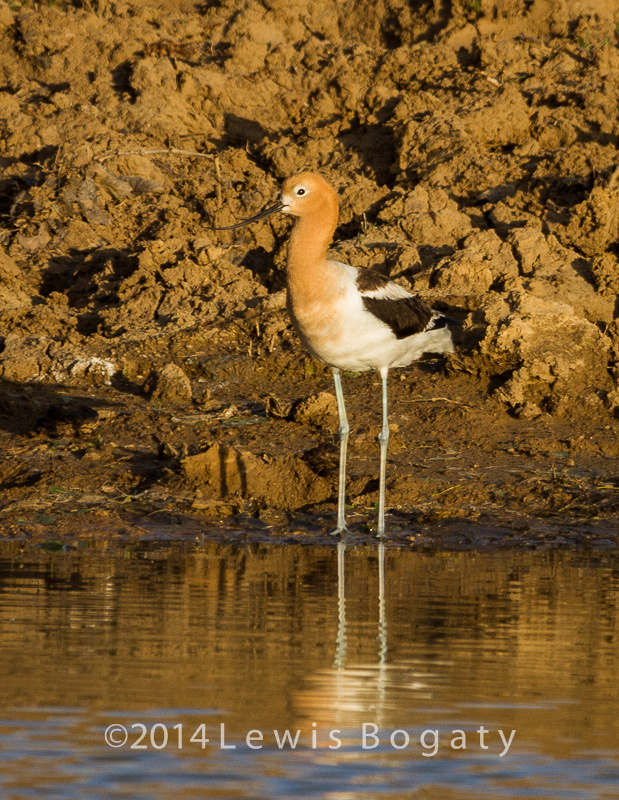 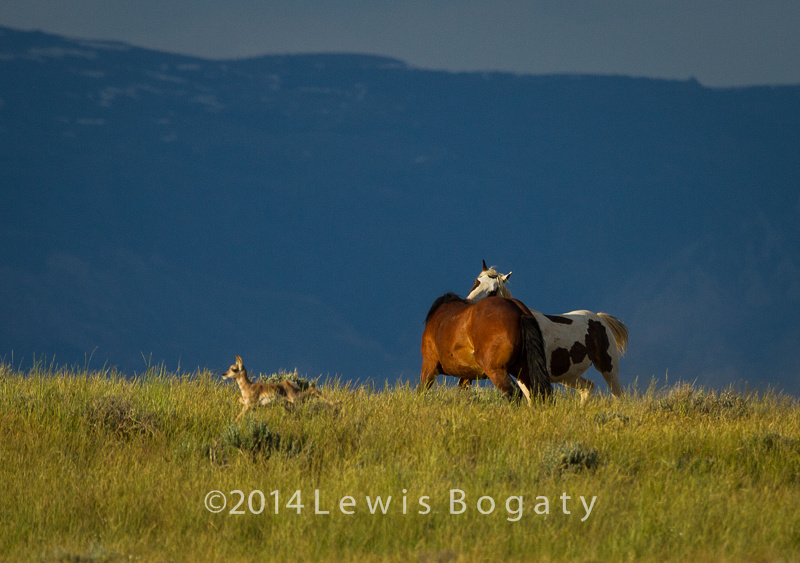 The size of this massive red ant hill can be seen by comparing the indents made by horse hooves in the front of it. 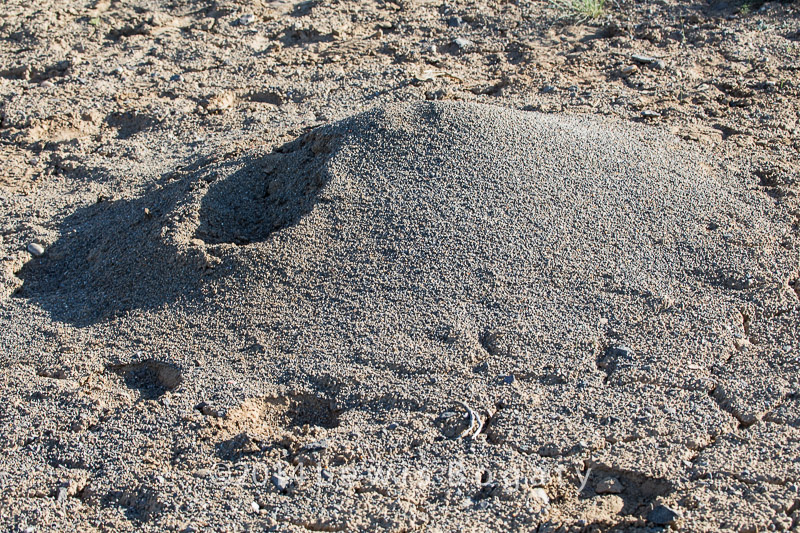 I went to the BLM land with the Red Canyon Wild Mustang Tours. Originally I planned to go with the group once, and then sally forth on my own. The first trip disabused me of that notion. The heavily rutted dirt roads, impassible in places, barely discernible in others, crossing through creeks on occasion, went on for endless miles and intersected in ways that would have left me completely lost. 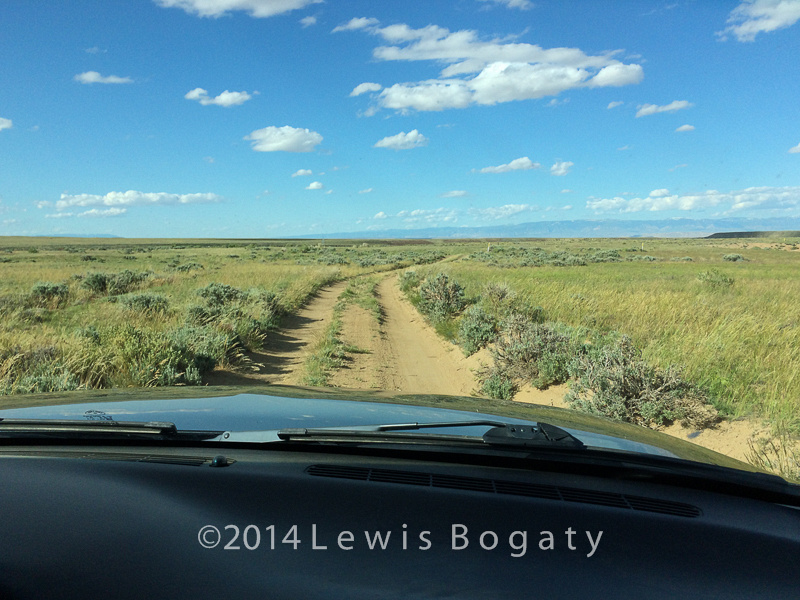 Moreover, the herd was moving around quite a bit. It was not in the same area twice. Often we would be close, but not know it, because a slight rise in the land completely hid the entire herd from view. It often took the guides, who are very familiar with the horses, quite a while to find them. It is unlikely I would have found them at all. Let me restate that: I would not have found them. At times we were able to drive close to the herd, but at other times we had to walk. On one occasion, while we could see the horses, we could not get near them on any of the dirt roads, and had to walk for about two miles. Walking through the tall grass and sage brush favored by the rattlesnakes was not something I wished to do alone.

So I was very happy to go with the tour group on each of my trips. Everyone there from the woman behind the desk to the owner was extremely nice and welcoming. In fact, for my final trip, Ken told me it would be free. Thank you, Ken. I was fortunate in getting to go out with three different guides, Stoney, Sonny, and Ken, the owner, who has been following the horses for years, seen here. 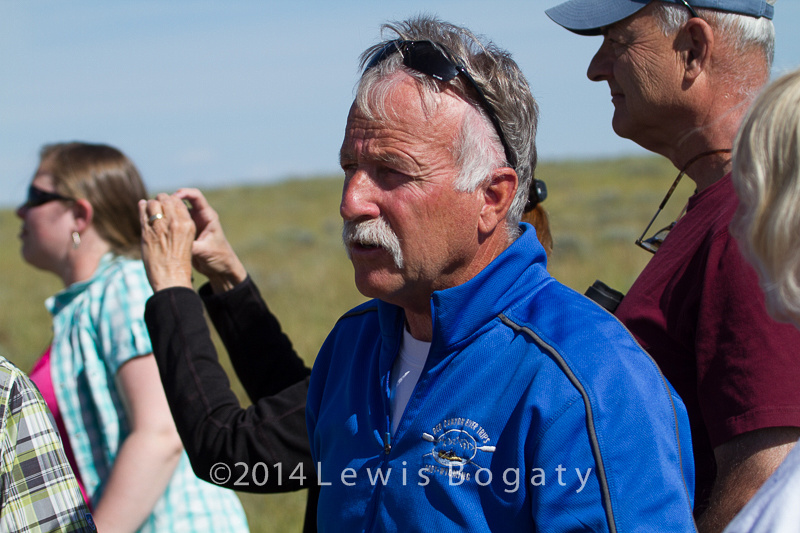 I had a great time with each of them, and each had a slightly different perspective. Because it was so early in June, I was extremely lucky to be the only person on several tours. Just the guide and me, and in one instance, both Sonny and Stoney took me out. 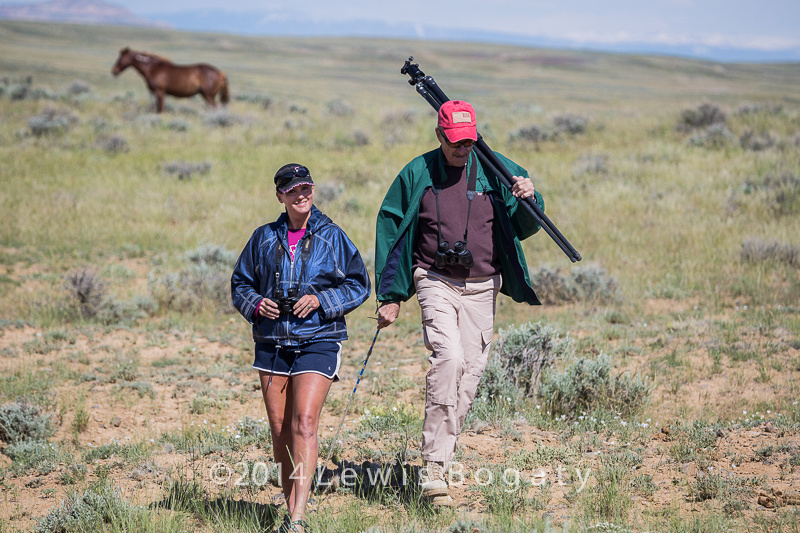 Hey, you can’t beat two guides for one photographer, especially when one of them carries your tripod while you rush off to grab a shot. Thank you, Stoney. But even when the van was full with twelve people, it did not diminish the experience. The guides were all conscious of my needs as a photographer, and in almost every case were successful in maneuvering us close to the horses and into the best light.

On every trip out there, that moment when we first encountered the massive herd of mustangs was breathtaking. It was truly a sight to behold. 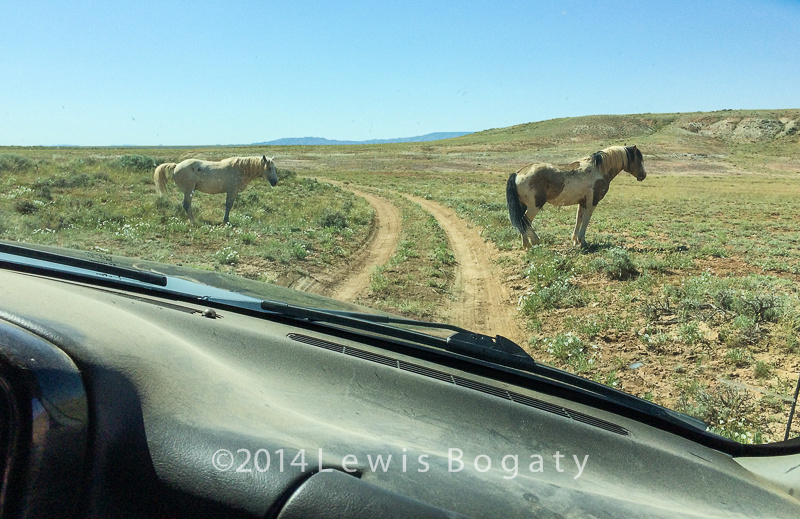 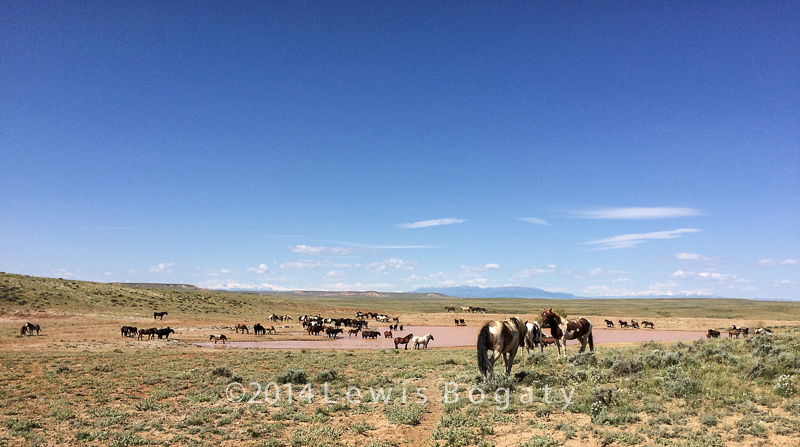 June was the right time to go. It was not yet so hot that the horses were sluggish. The studs were battling and chasing the mares. The herd was constantly moving. There was so much going on at times that I didn’t know where to point the camera first. 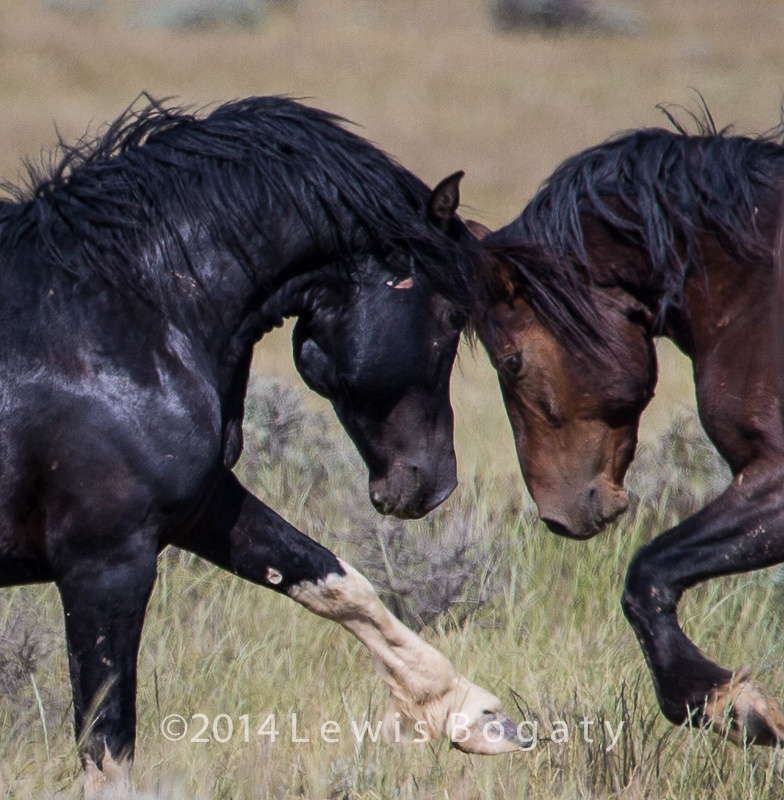 The two-year-old mares were very curious and often came so close that we had to back away for fear of the protective male, hovering behind, as in this picture. 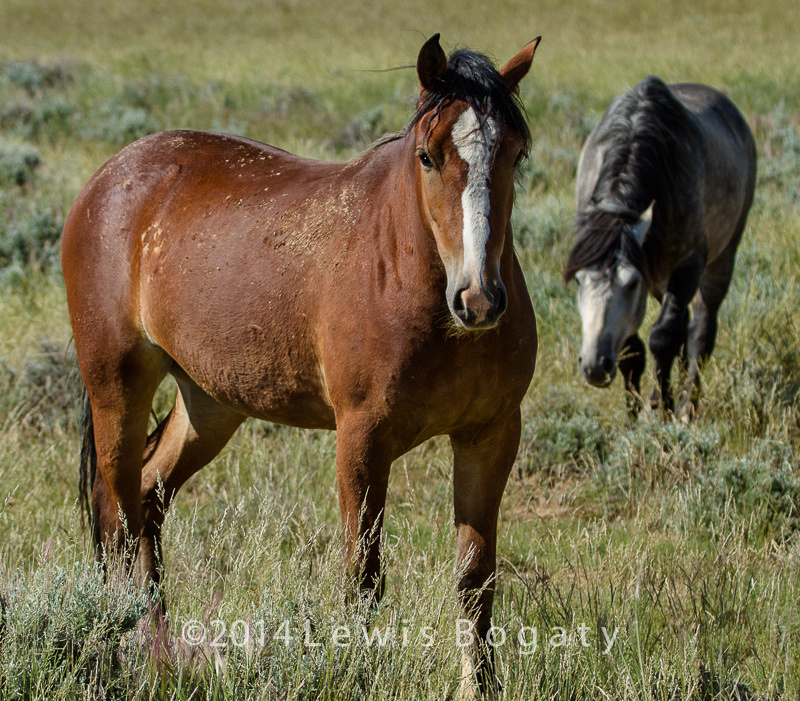 One of the more bizarre scenes was this. 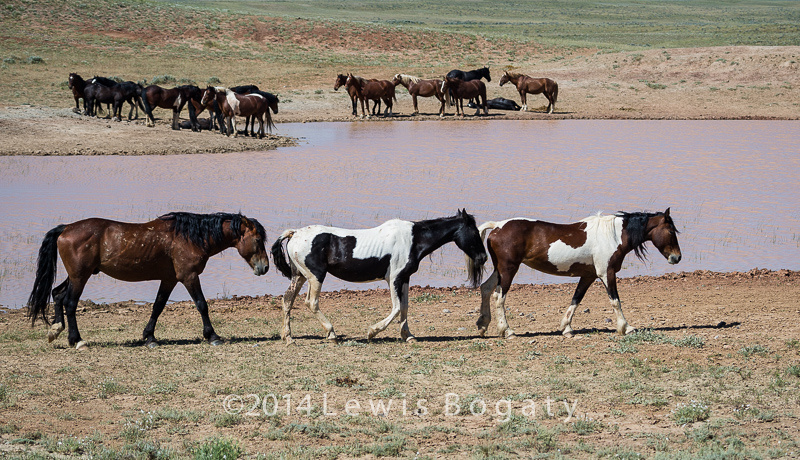 This stud had been keeping his two mares running in line in front of him for two weeks to the point that they were getting skinny. Every time we were there, they were in motion in non-stop circles around the herd. The reason can be seen in this next picture. This young stud was determinedly following. The guides had never seen such sustained behavior before. 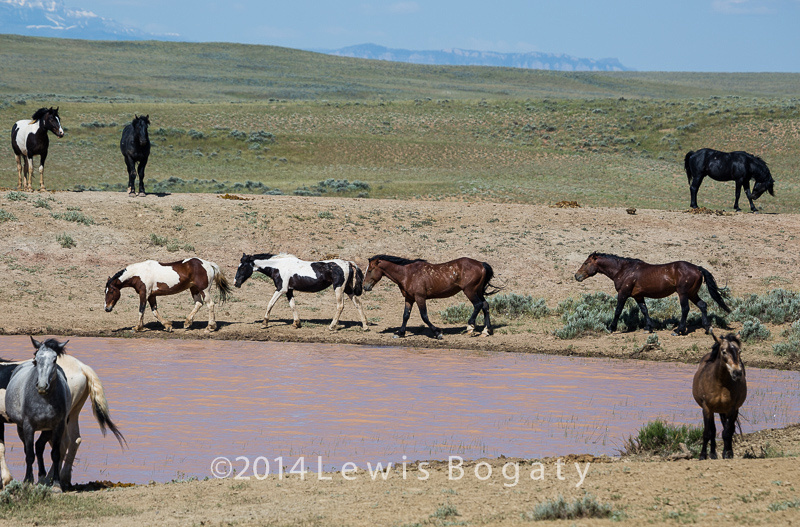 And then there was this scene on the highway on our way to the horses one morning: A flat bed truck filled with hay bales ablaze. Ya gotta watch those cigarettes flicked out the window, guys. 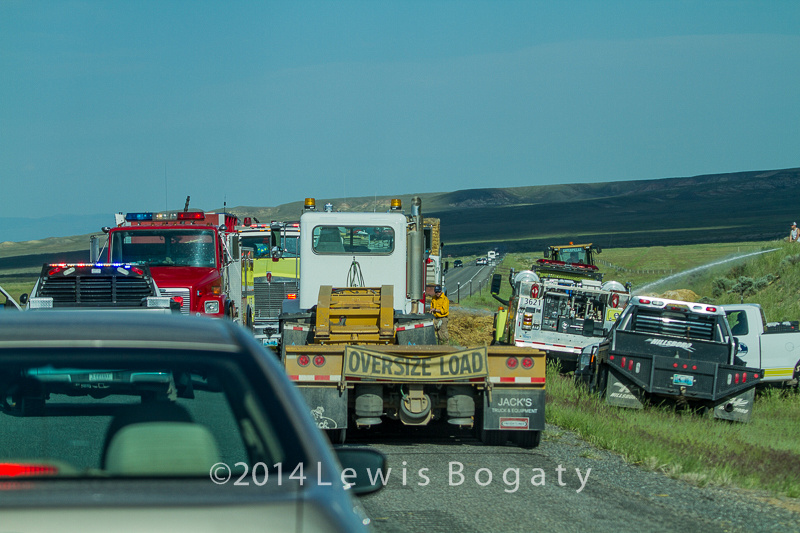 All in all, it was a great trip. You can view a selection of my favorite wild mustang photographs from the trip in the Animals section of my website, www.LewisBogatyPhotography.com