The so-called "Manhattanhenge," the couple of days when the setting sun aligns with the street grid of New York City, occurred this past weekend. The internet gurus all instructed: go as far east as you can. I went west. The farther east you are, the more likely that your sun will appear as a tiny dot in a vast canyon - not what I wanted. (Of course, if you must have the Empire State Building, or the Chrysler Building, then you have to go east.) See my tips for photographing Manhattanhenge at the end of this post.

On Saturday, I was engulfed in a throng of Times Square tourists, but I was the only person on the corner who had come to see the sunset, since the experts had said Sunday was the better day. On Sunday I was in a crowd of cameras, but nothing like the crowds to the east. And as it happened, Sunday was a far worse day than Saturday, with clouds turning the sun to little more than a smudge after three or four minutes.

At 8:10 Saturday the sky began to glow a golden yellow, which lasted long enough that I wondered if that was all there was going to be. And then, quite suddenly, a blinding explosion of light -- at its center the ball of the sun slid from behind the far building on the left side of the street. 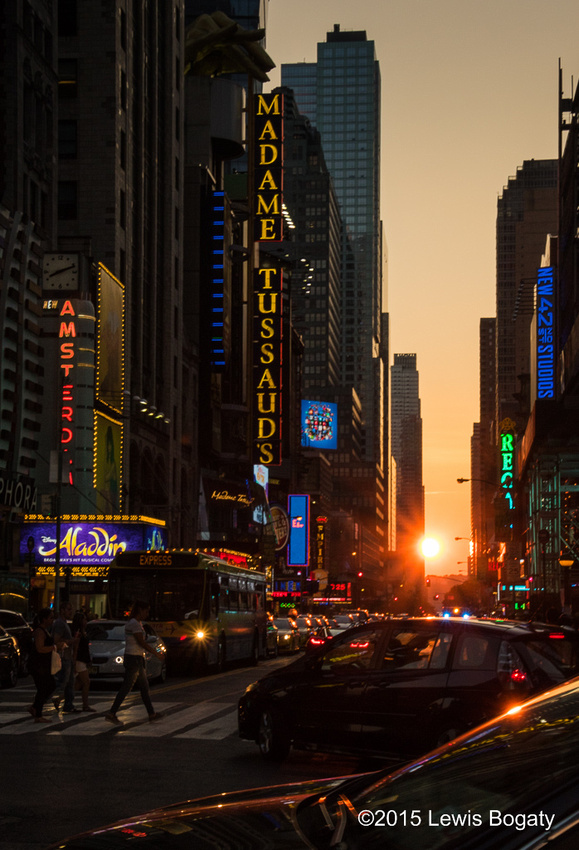 Within minutes the flaming ball had moved into the center of the street. 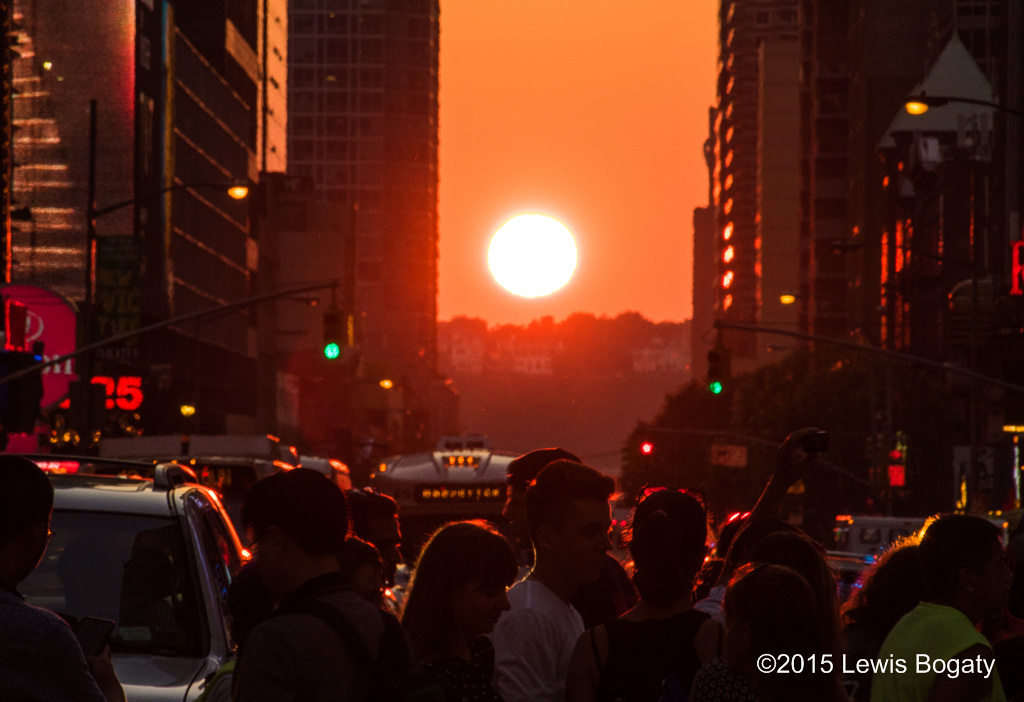 The whole event lasted about 10 minutes. 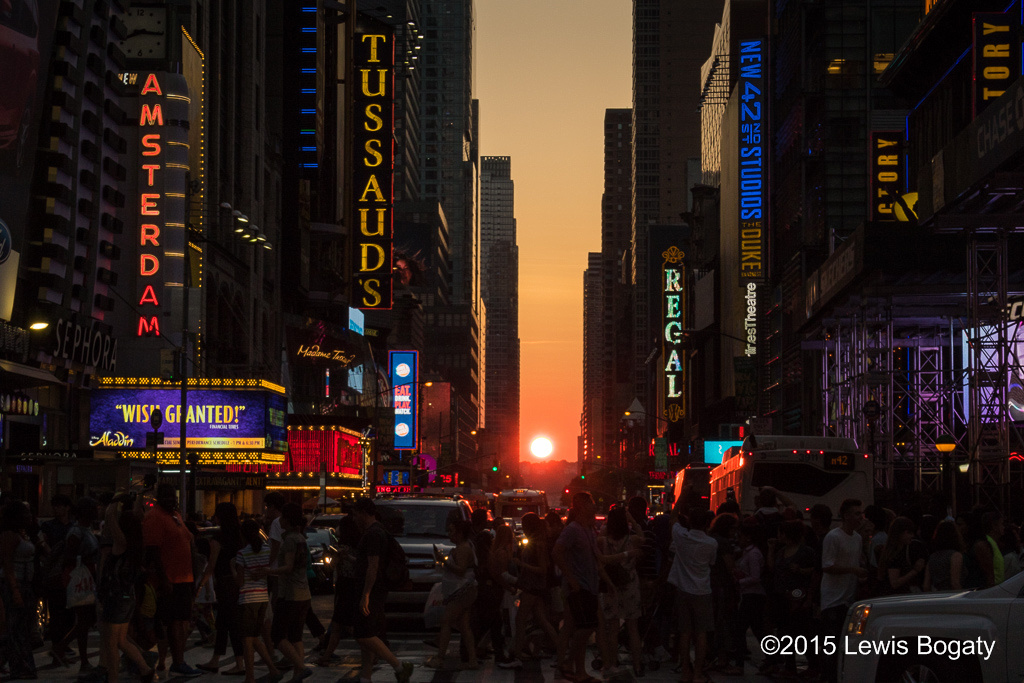 Then just as suddenly as it had appeared, the sun was gone below the horizon.

On Sunday, the ball of light appeared again behind the building, but within minutes it was shrouded in cloud for a very different look. 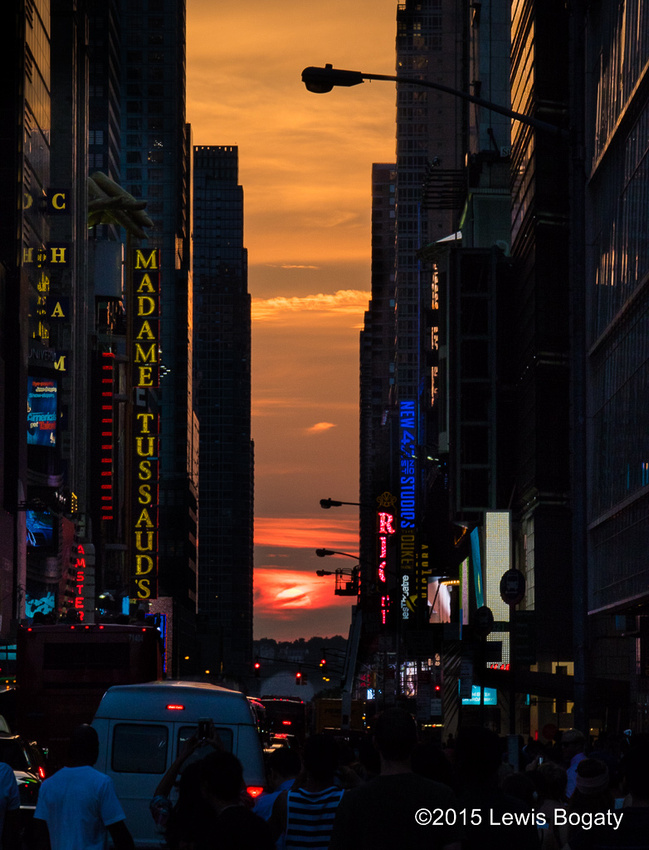 Here's what worked for me.

Needless to say,you want to be on the east side of the street so that when the traffic light stops the cars, you can run out into the middle of the street.

After the first blinding moment I realized you DO NOT want to look through the viewfinder. Very dangerous. Use the LCD screen and do not look directly at the sun.

Because the extreme brightness will throw your camera's meter off, it is best to shoot with all manual settings.

Focus: Set focus before the sun appears. Aim at a building deep in the picture and when auto-focus achieves focus, flip the switch on the lens to manual. Take a test shot. If it is sharp, all you images will be sharp, so long as you don't change the zoom length (or your position.) If you want to change zoom length, refocus the same way, but aim at something to the side, away from the brightness.

Exposure: Set the exposure when the sky has gotten bright. Once the sun appears, you'll still have time to adjust on the fly (remember, there is down-time waiting for the traffic light to allow you onto the middle of the street).

I wanted a significant depth of field, so I set the aperture to f16 and did not change that. I set the shutter speed to 1/80 of a second with ISO at 400. And I bracketed. On Sunday, when it was cloudier, I had to go to a slightly slower shutter speed. (Note: do not use auto-ISO. It will defeat your manual settings.)

The lens you will need is dependent on where you are. I shot from 7th Avenue on Saturday and 6th Avenue on Sunday. Depending on whether the shot was vertical or horizontal, zoomed in or zoomed out, the shots ranged from 25 mm to about 170 mm.

See my photography at LewisBogatyPhotography.com More Manhattanhenge images in the City Scenes gallery of the website.