Back At The Rockville Train Bridge, June 2016

Just returned from several early-June days at the Rockville Bridge, one of my favorite places to photograph trains. 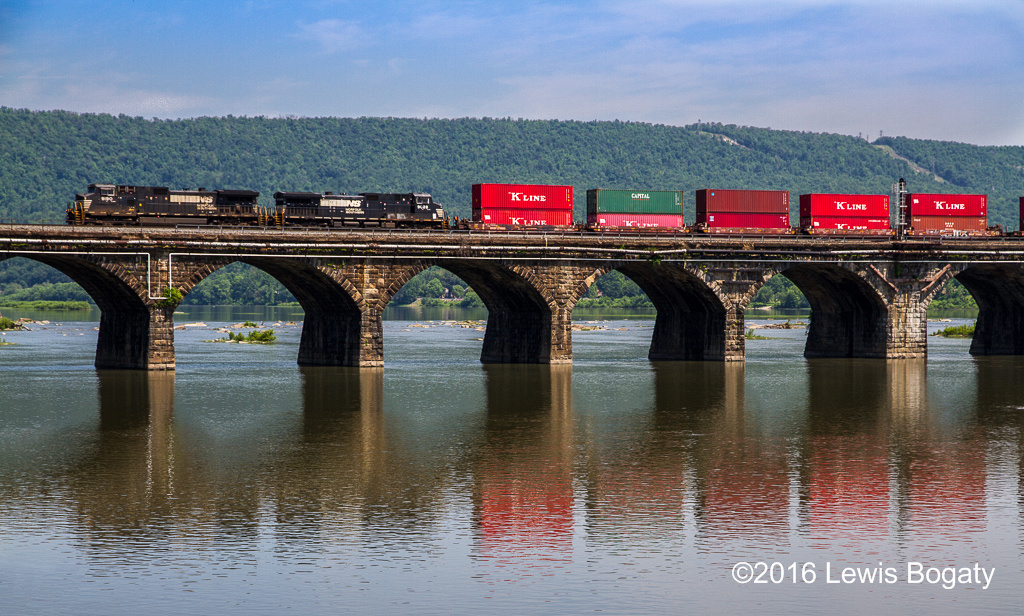 Lots to photograph, from first light at 5 in the morning: 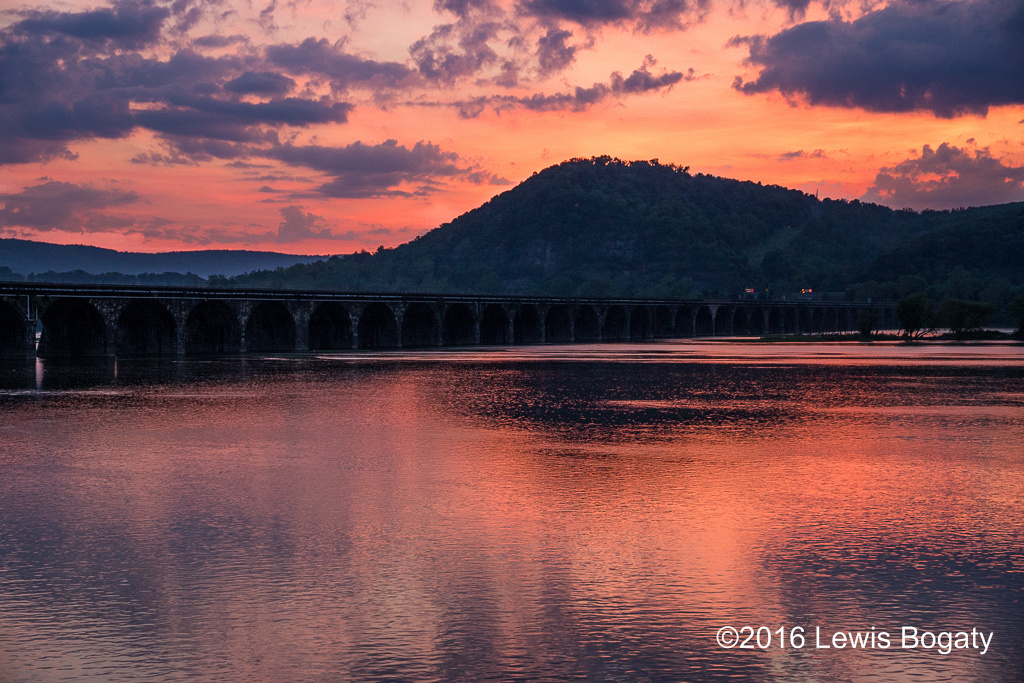 to 6:30 when the sun first broke over some heavy clouds: 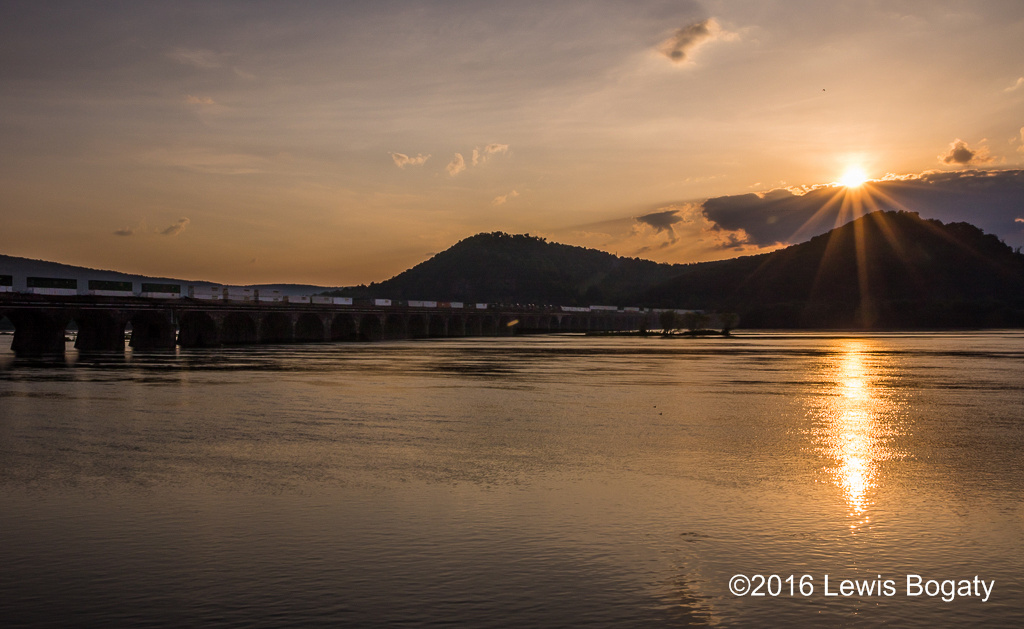 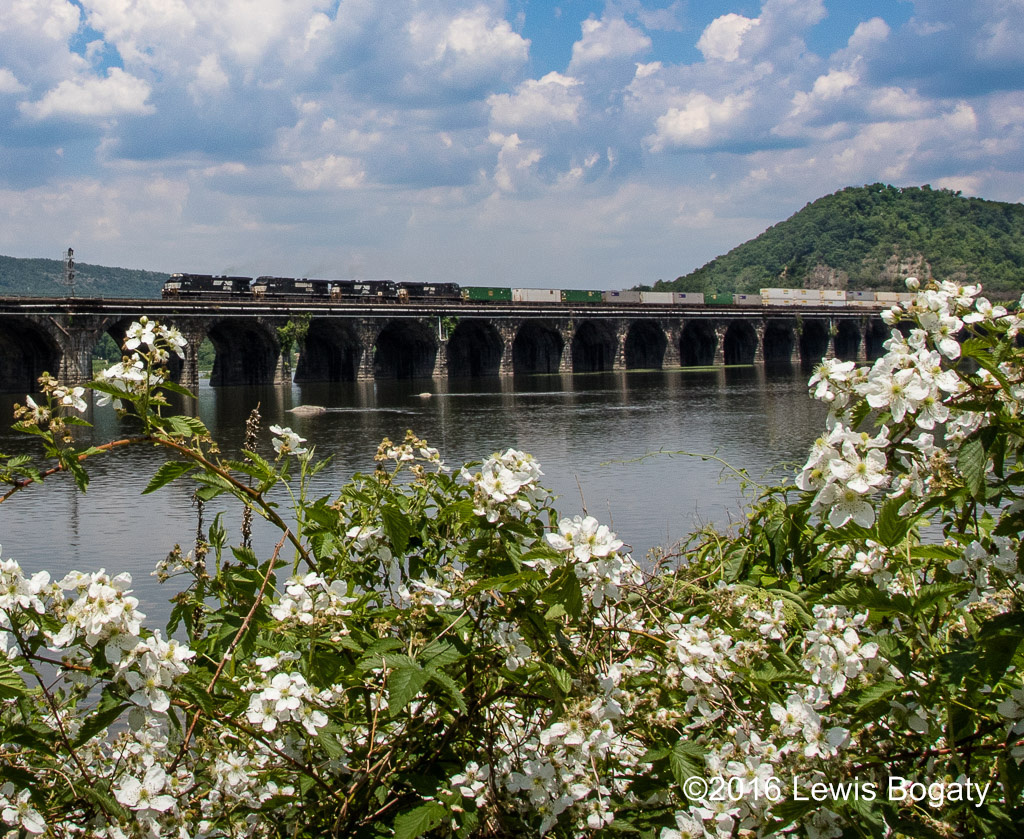 to 8 p.m. when the setting sun painted the arches a golden red for a fleeting few minutes, as these light engines were about to pass a stack train: 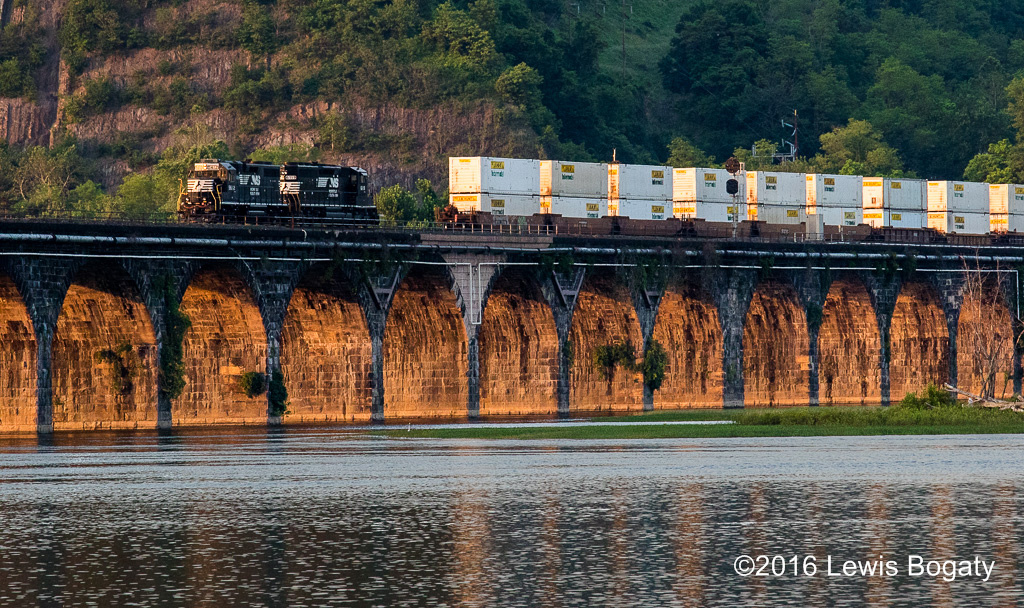 and into the night. 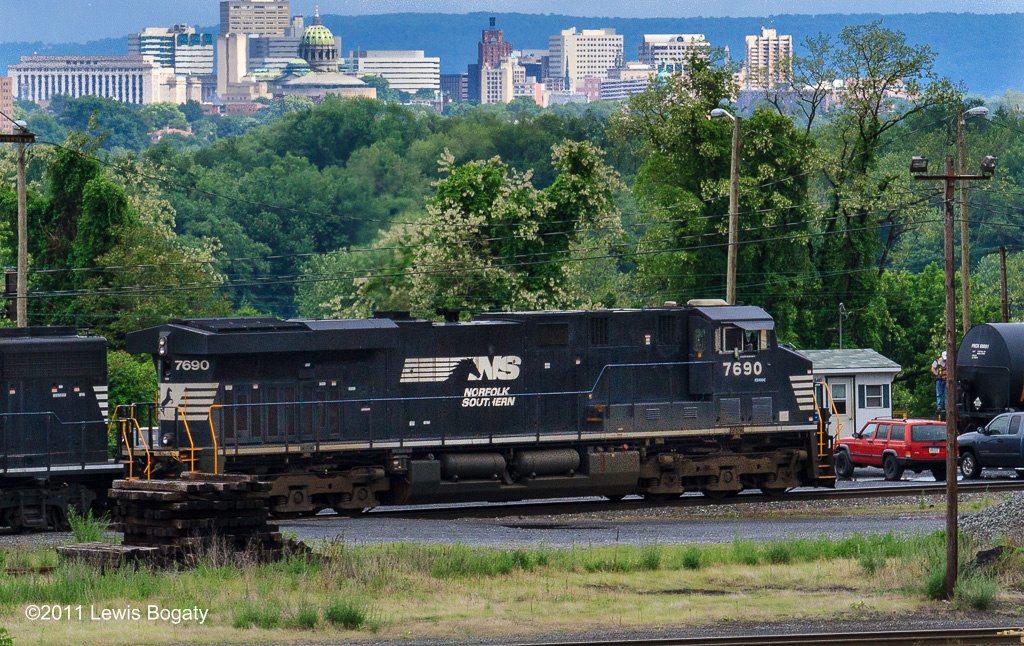 Completed in 1902, the 3,820 foot Rockville Bridge is the longest stone arch railroad viaduct in the world, with 48 70-foot arches. 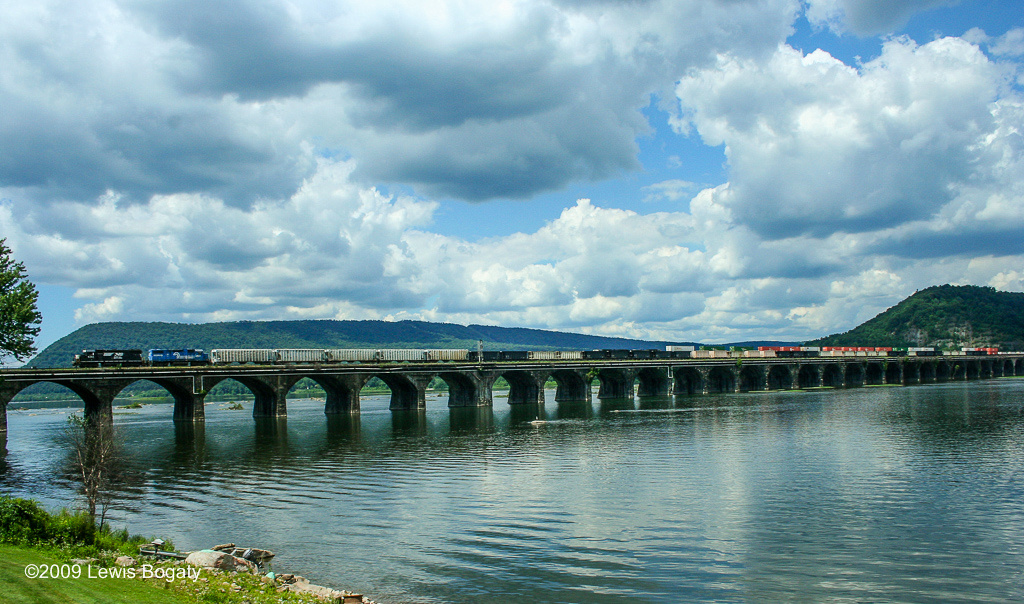 Today, the bridge is used by Norfolk Southern freight trains and one Amtrak passenger train a day in each direction.

With at least 4 train lines converging on Harrisburg, and with the Harrisburg, Rutherford, and Enola train yards in the immediate area, and the Reading Bridge -- shown below -- just to the south, 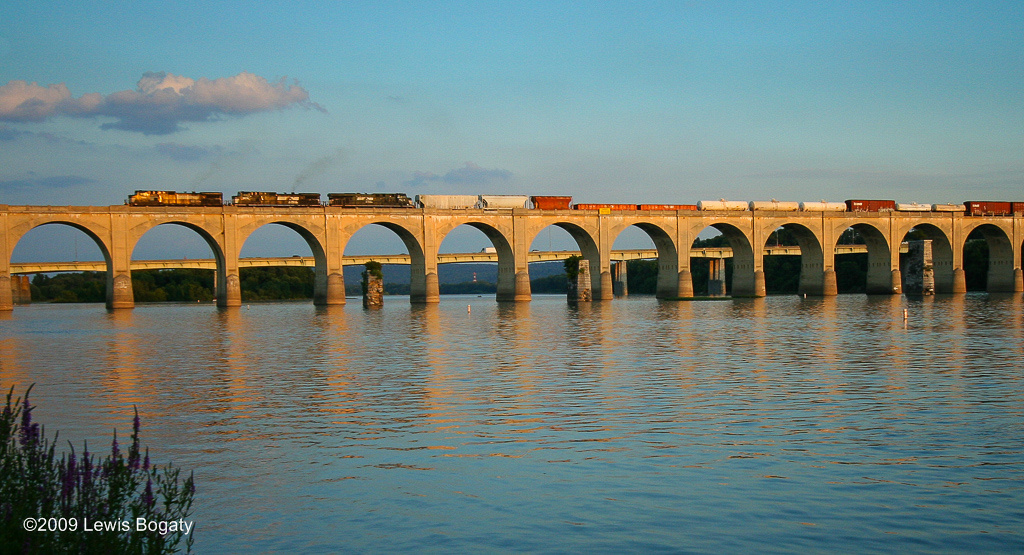 trains are running 24 hours a day.

As many times as I have been here, the weather and the river always provide new images. 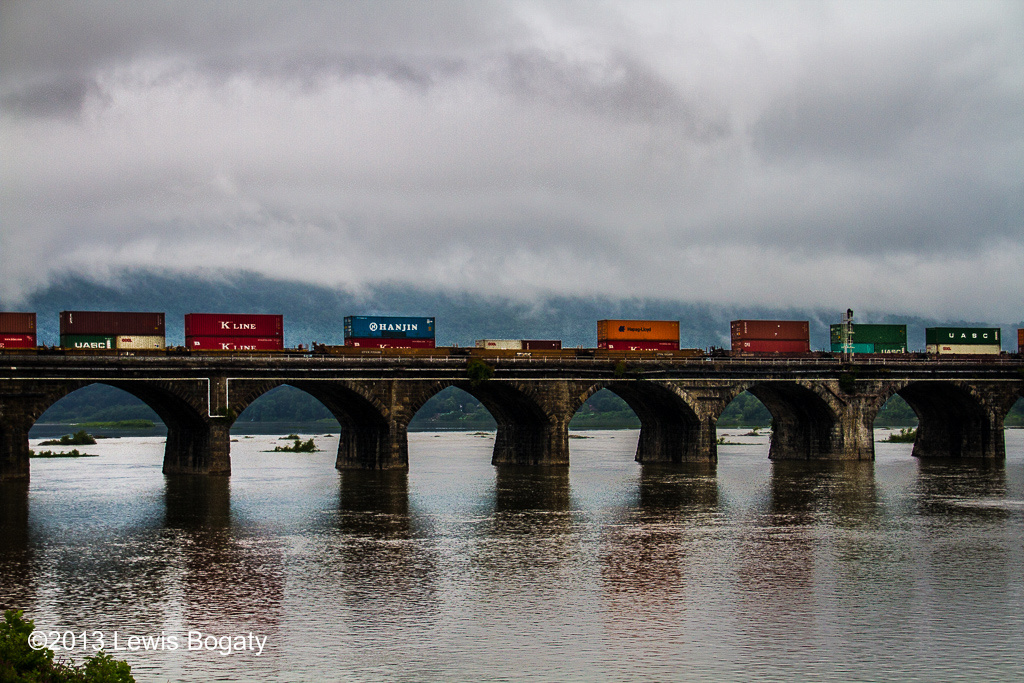 And there is always some unusual train activity. The day I arrived, seven freight cars derailed in Harrisburg, so this crane train appeared, on its way to the rescue. 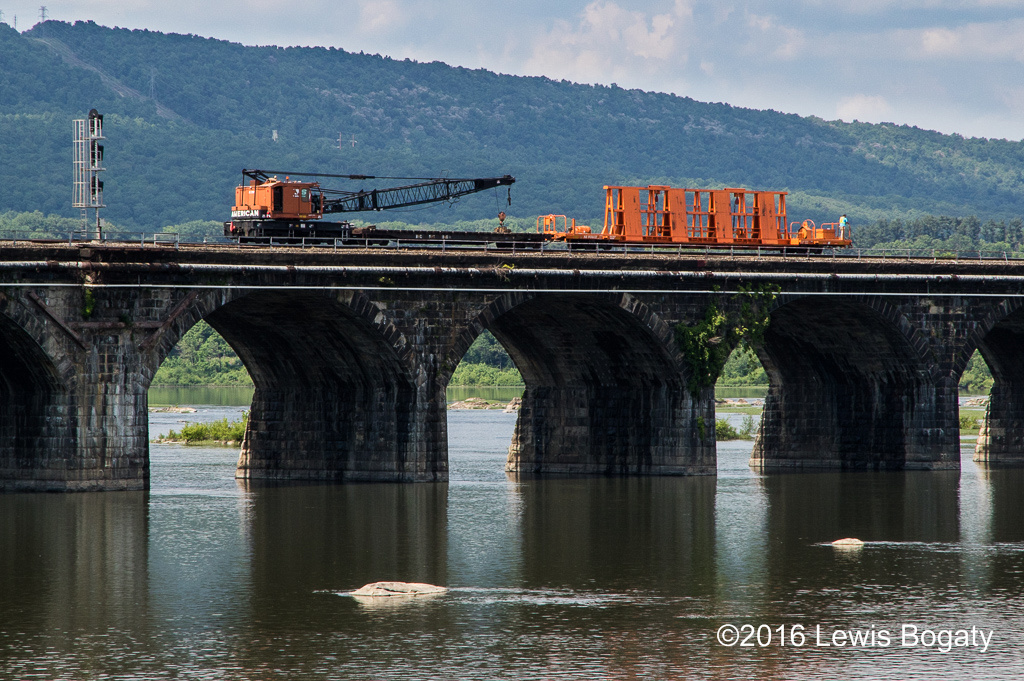 Seen a caboose lately? How about two? 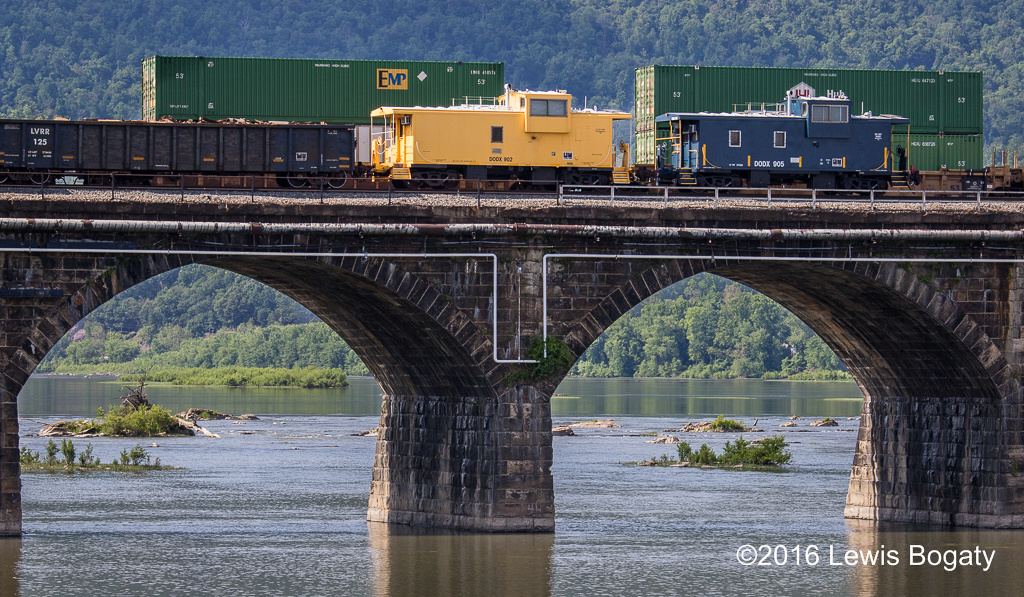 Check out this exotic cargo 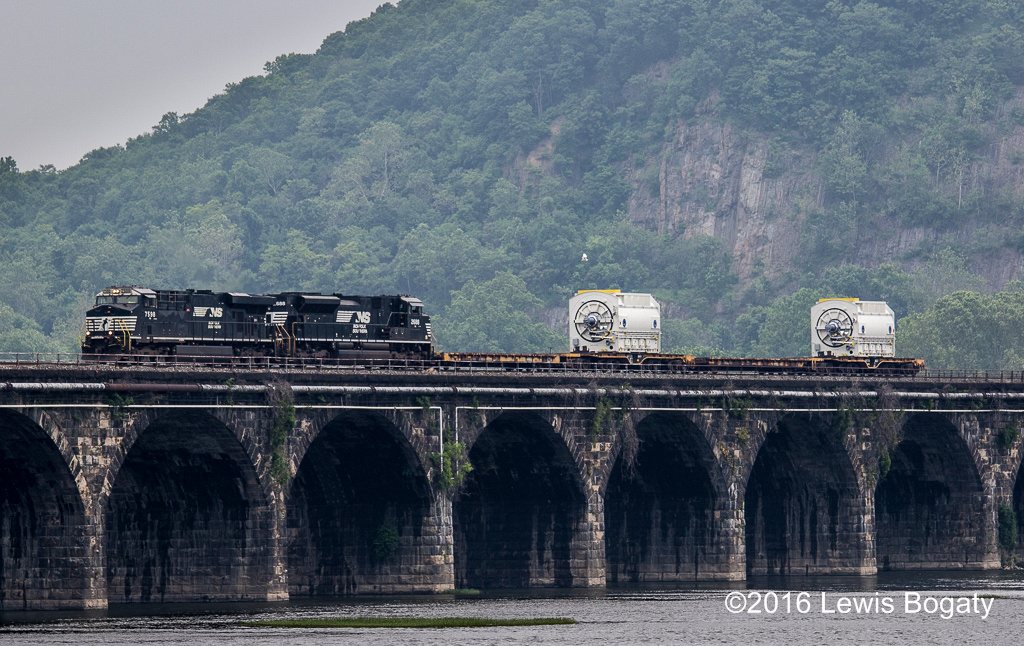 Just after dark one night, the rarely seen camp train – living quarters and dining facilities for maintenance-of-way work gangs as they travel around the country – crossed the river. 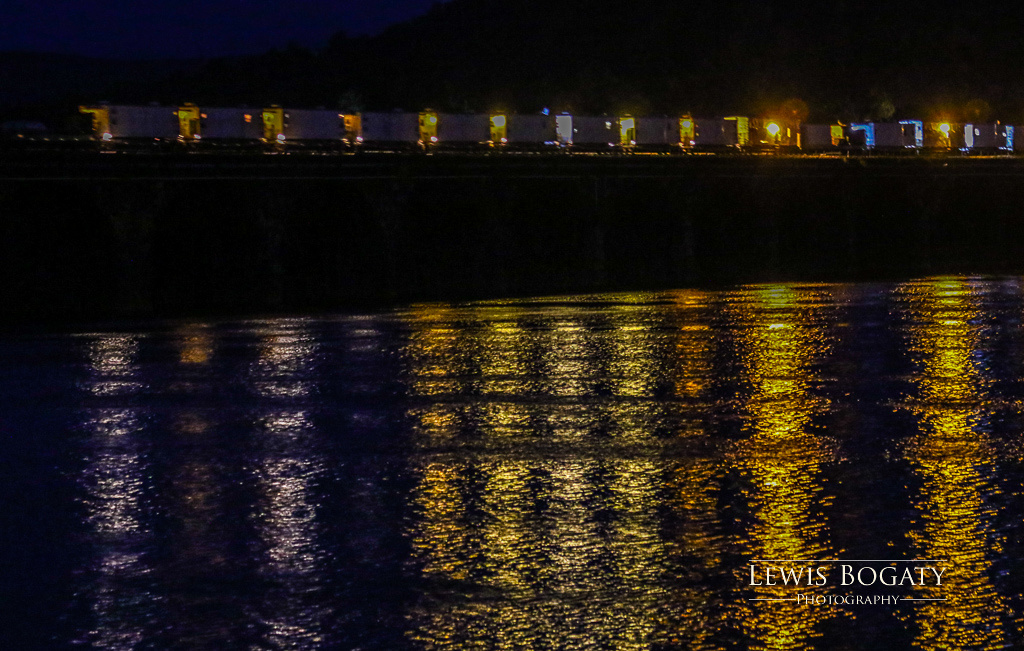 Over the years, I have photographed the last trickle of Conrail colors, now completely gone. 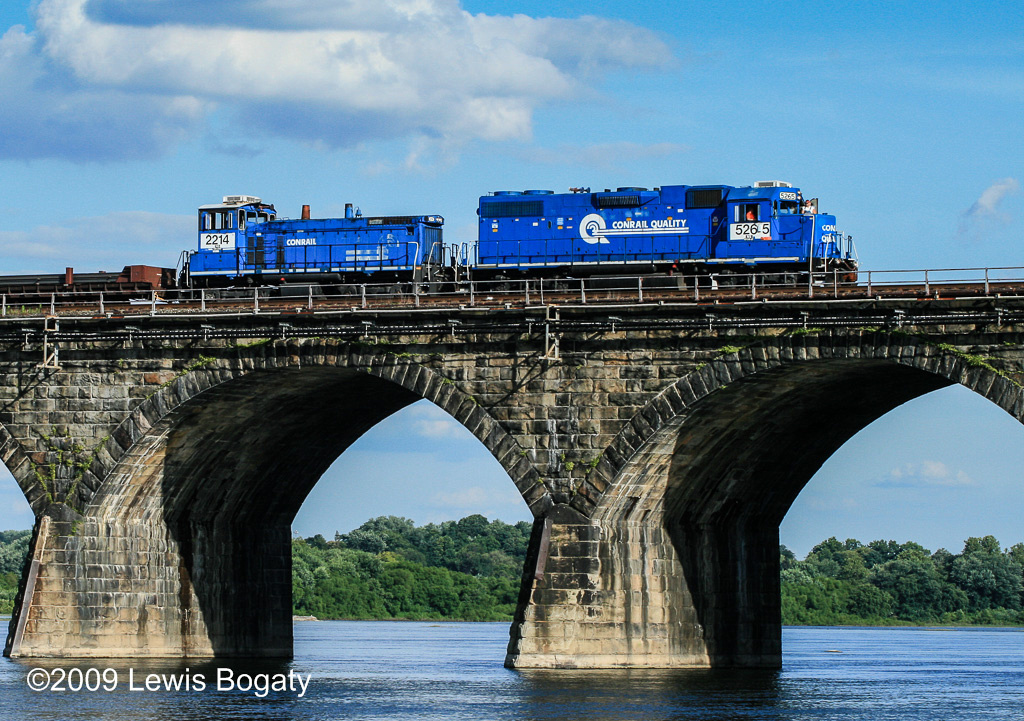 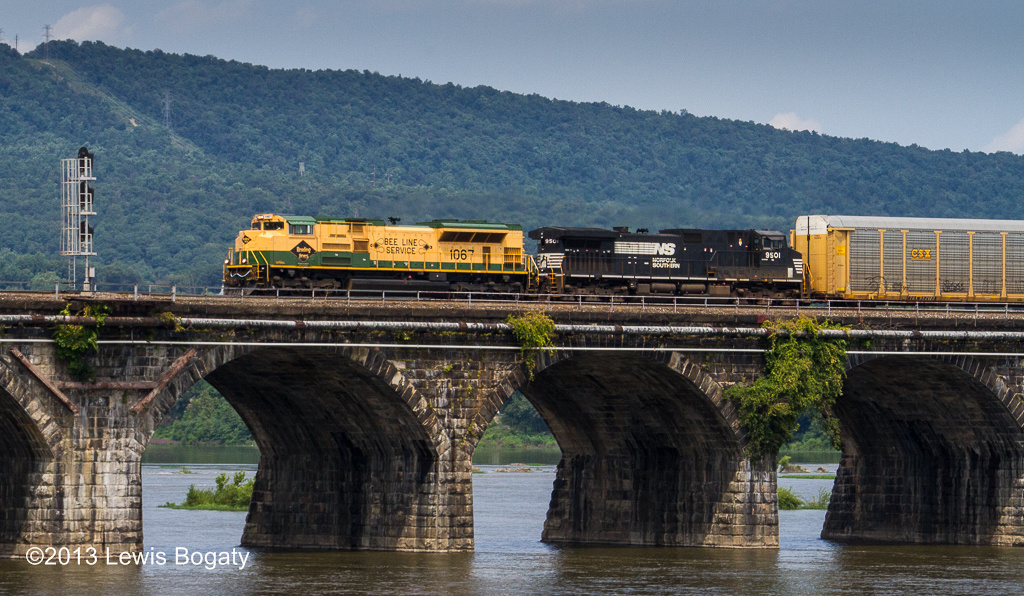 And of course there are many meets. 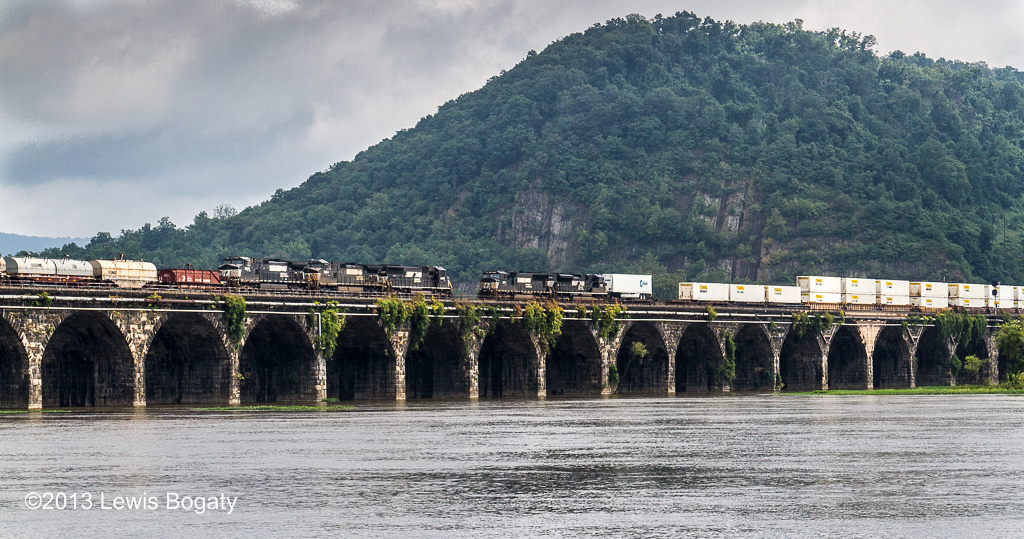 The only place I would consider staying is Keith Latimer’s Bridgeview Bed & Breakfast in Marysville, perched right on the river south of the bridge. More like going to visit an old friend at his country house than staying at a hotel. Once established in my same favorite room -- one which opens right onto the deck overlooking the bridge and river -- I settle in at a table on the deck, or the swing in the shade under the deck, or the grass at the edge of the river, with scanner (Harrisburg Terminal Dispatcher 160.980; nearby defect detectors at Marysville MP 111 and Banks MP 113 on the Pittsburgh Line, among others) and camera. The indoor viewing room, with its dispatcher board, shows where trains are as they approach the area. At the Bridgeview, I’m just steps from the trains, the birds, the sunrise. Below, Keith Latimer on the deck. 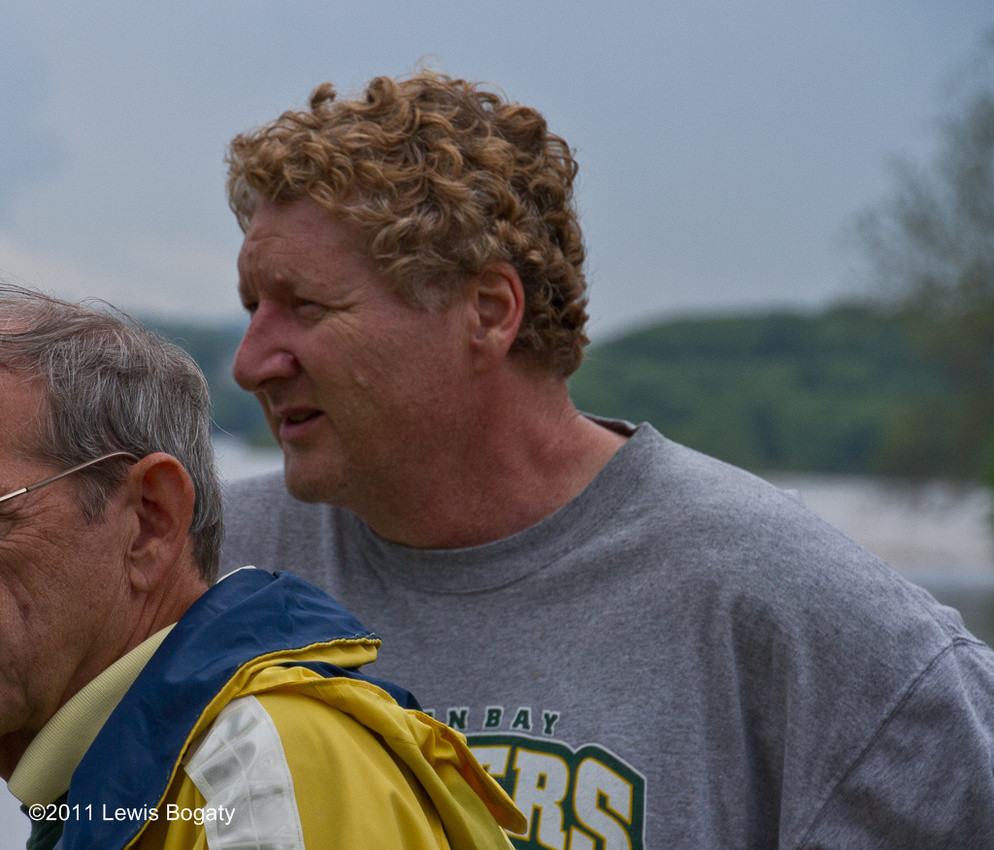 After sunrise on the deck (with coffee that's ready at 5 a.m.), followed later by fresh-cooked breakfast in the dining room, it is time to follow the sun. Off to the east side of the river for the morning, 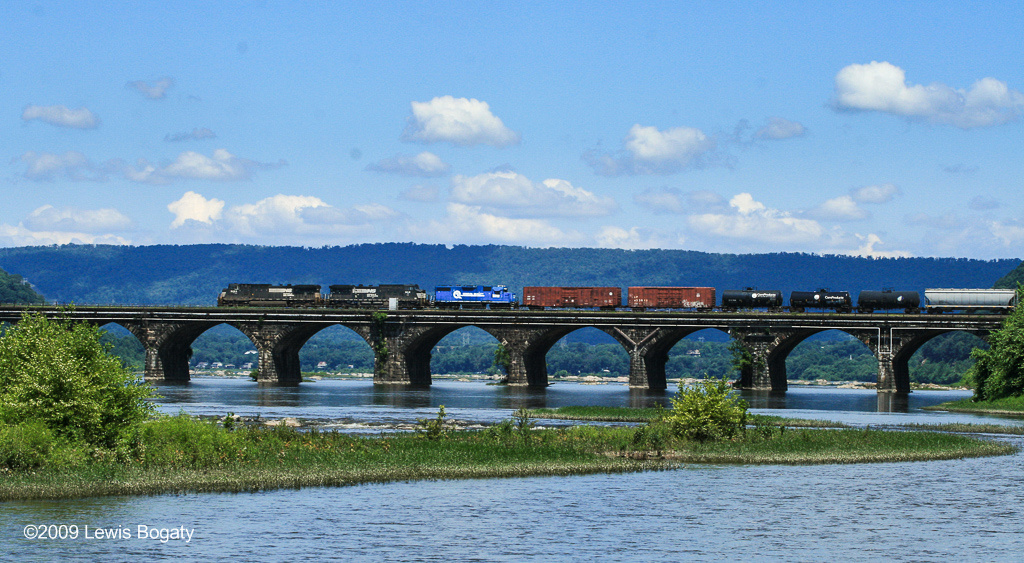 back to the B & B for the afternoon, 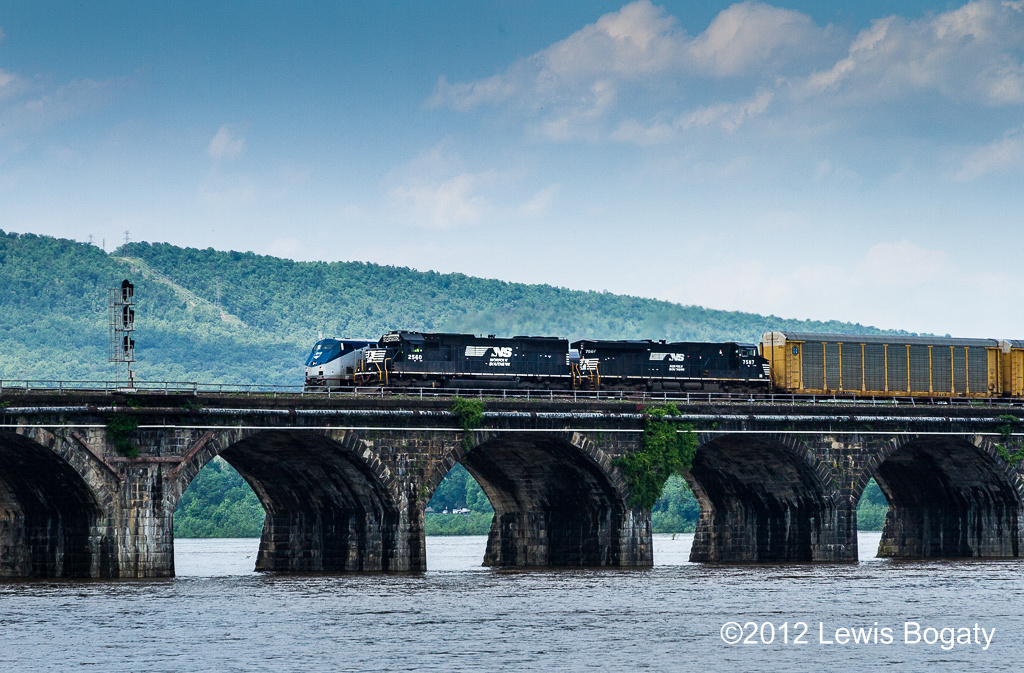 and as the sun moves west and north, it is on to the boat launch just north of the bridge, 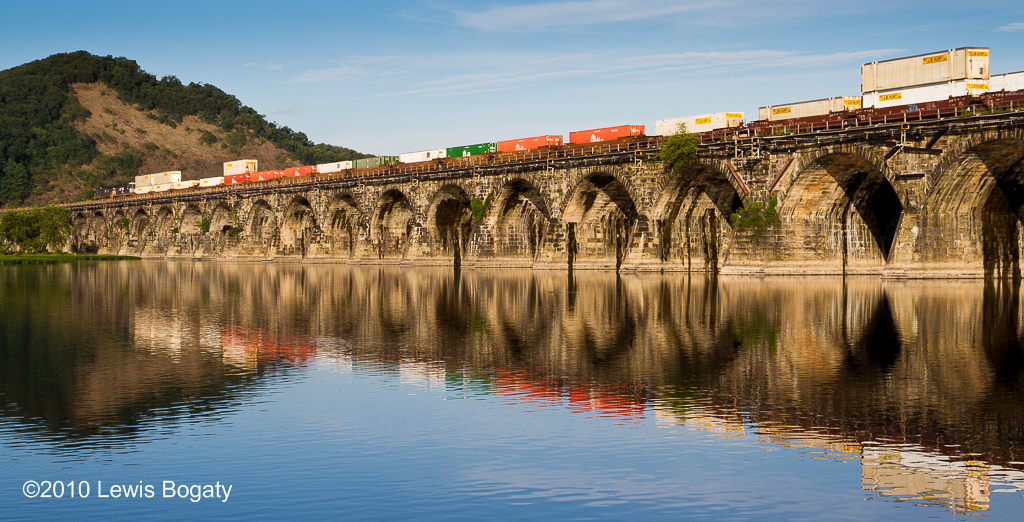 returning to the B & B for the highlight of the day, the very brief moments of sunset “glow” in the arches 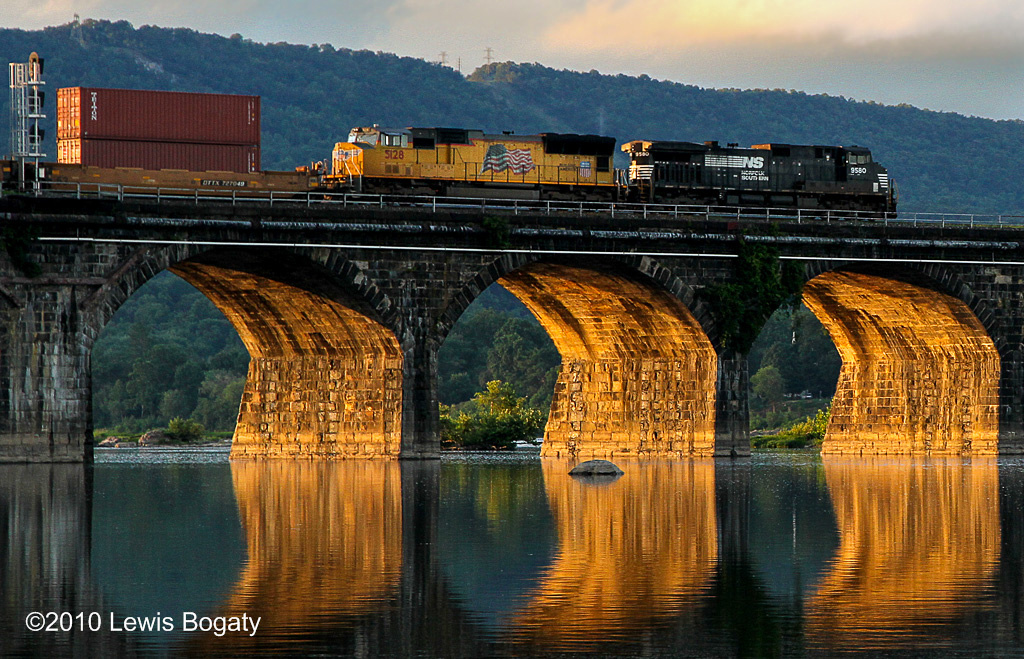 and then night photos all through the night.

Side trips to Enola are a mere 3 minute drive, and a viewing area at CP Overlook, on the Overlook Bridge has openings in the fence for camera lenses. 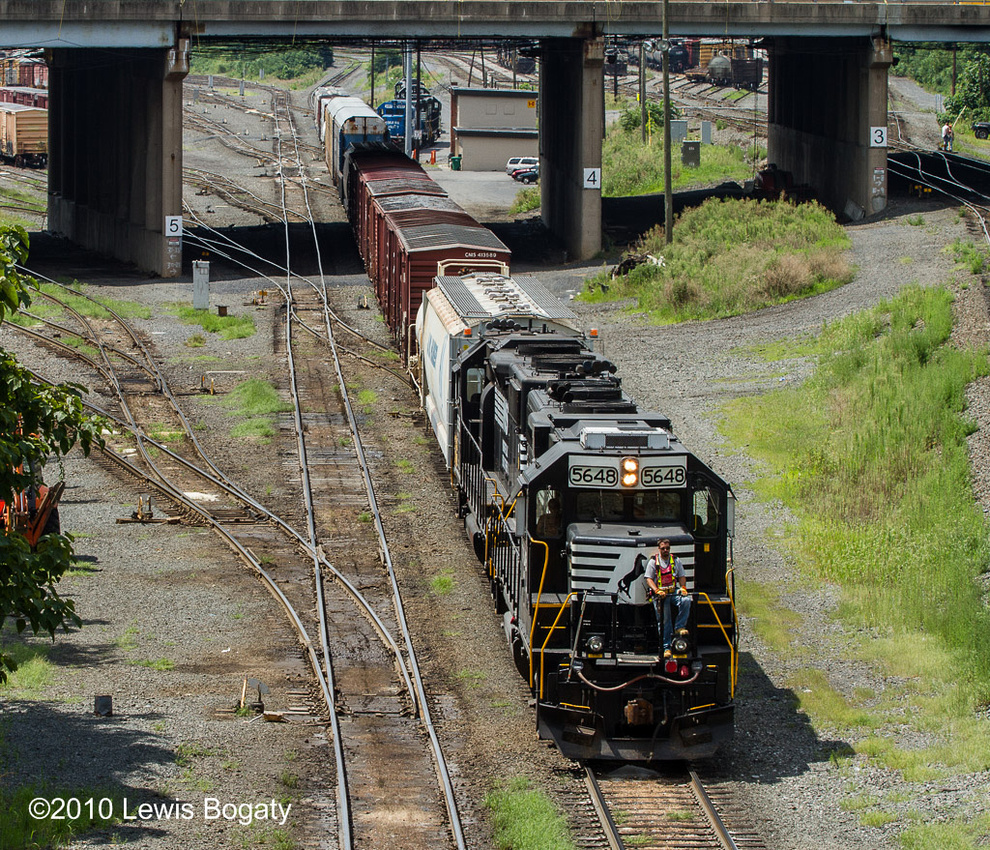 Birds are plentiful on the river. Egrets can always be seen, 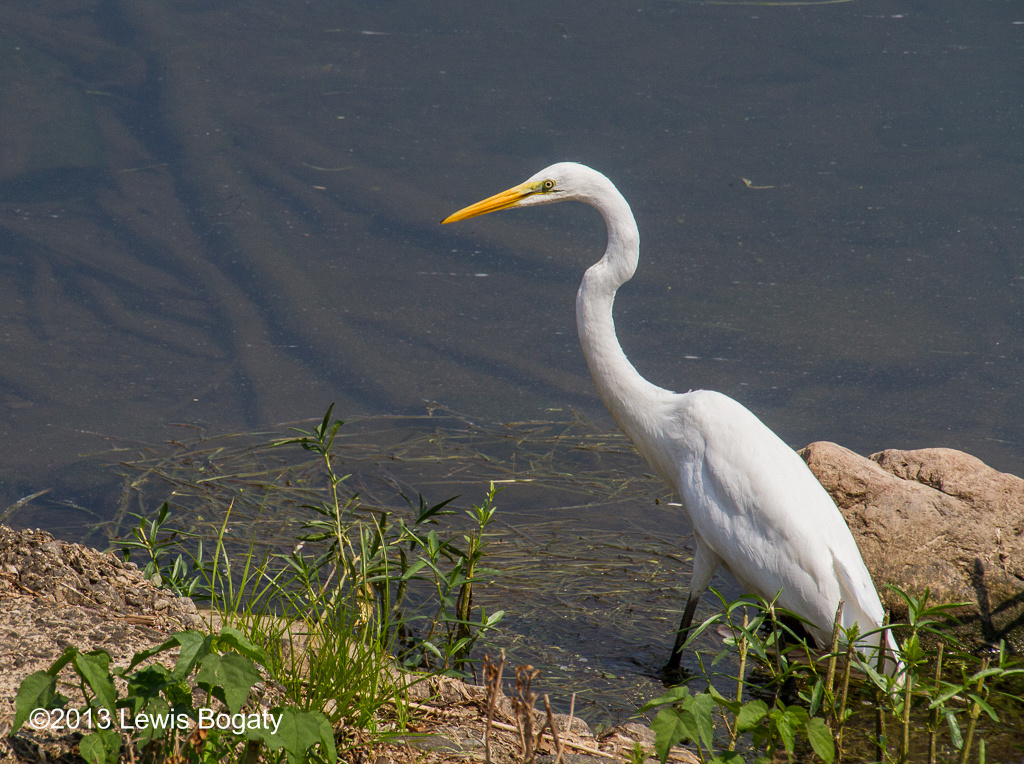 and on these June days, eagles were fishing on the river and flying over the B & B to their nest in the woods across the road. This year, for the first time I also saw a mink swimming at dawn.

Want to go to the top of the mountain on the Harrisburg side for an overview of the bridge and Enola Yard. Don’t. Dangerous does not begin to describe it. The only spot with a view is on a very narrow ledge. To reach the ledge, you must climb down a short but steep slope, preferably on your butt. Once you get there, you are standing on the edge of the cliff, on ground that is slanting nearly 45 degrees, and with nothing really to hold on to. At least one rail photographer has fallen off the cliff.

Having said that, I confess to having ventured up there. At the time of my first expedition, in one of my early years at the Bridgeview, this involved a long hike through the woods on unmarked trails after driving to the top of the mountain. Keith had made me a map, but many of the trails barely existed or were overgrown or confused by fallen trees. And exactly which tree I was supposed to turn left at was entirely obscure. After walking for what seemed like a half hour or more, I came to the conclusion that I had no idea where I was going. So I called Keith, who soon appeared, his camera in hand, and led me the last bit of the way (I was closer than I had thought). We spent the morning photographing, standing on that uncomfortable slanted ground, until the light was no longer good. Not your ordinary innkeeper. 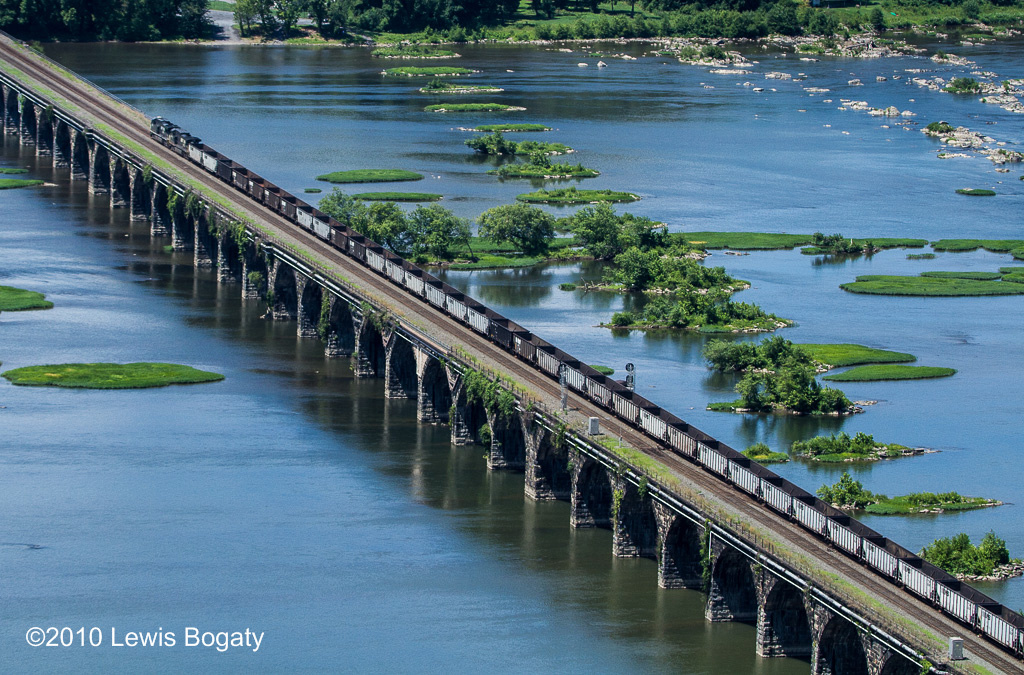 From CP Hip and CP Mary on the west side of the bridge to CP Wye and CP Rockville on the east, the trains keep coming, and the river flows on. A nice place to be. 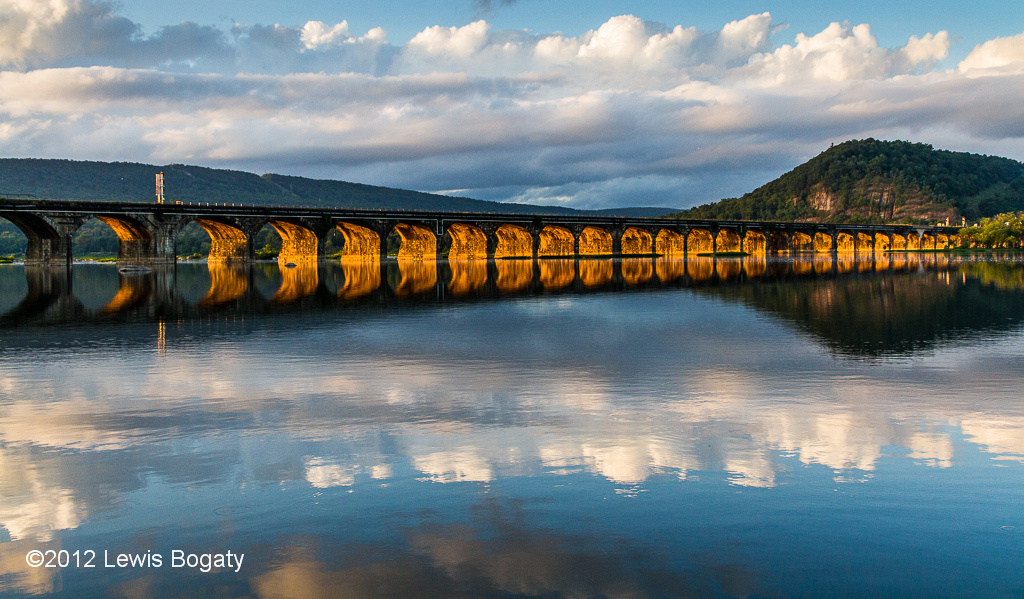 Aglow, Sunset on the Rockville Bridge

You can view a selection of my favorite Rockville Bridge images (most of them different from the ones included here) on my website, LewisBogatyPhotography.com by clicking here:  http://www.lewisbogatyphotography.com/p854788448